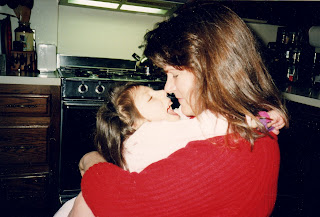 Few women of child-bearing age realize that plain old soap and water can prevent the #1 viral cause of birth defects, congenital cytomegalovirus (CMV). And, women also need to know that they shouldn't kiss their toddlers around the mouth.
Although CMV causes more birth defects than Down syndrome, more than half of OB/GYNs surveyed admitted they don't routinely caution their patients how to avoid the virus. Women who care for young children are at a greater risk for catching CMV because preschool children are the majority of the carriers. Although it is usually harmless to healthy individuals, it can be devastating to a developing fetus.
According to the Centers for Disease Control and Prevention (CDC):
Every hour, congenital CMV causes one child to become disabled
Each year, about 30,000 children are born with congenital CMV infection
About 1 in 750 children is born with or develops permanent disabilities due to CMV (See http://www.cdc.gov/cmv/)
In order to reduce the spread of CMV infection, women of childbearing age should refrain from kissing their children around the mouth, sharing food and utensils with them, and they must wash hands their hands diligently with soap and water after wiping runny noses, changing diapers, etc. The CDC states: “If soap and running water are not available, you may use alcohol-based hand gel.” For alcohol-based hand sanitizers to be effective, the Food and Drug Administration (FDA) recommends a concentration of 60% to 95% ethanol or isopropanol.
I’m a mother who didn’t know about CMV prevention until it was too late for my daughter, Elizabeth, who was born with congenital CMV in 1989. The moment Elizabeth was born, I felt a stab of fear—her head was so small, so deformed. The neonatologist said, “If she lives, she will never roll over, sit up, or feed herself.” He was right.
By her 16th birthday, Elizabeth had survived several bouts of pneumonia, seizures and major surgeries. Weighing only 50 pounds, she looked odd to strangers, but her cheerful, soul-capturing smile made her lovely to my husband, Jim, and me. Two months later, she died suddenly during a seizure. Jim cried, “No one is ever going to look at me again the way Elizabeth did.” No other parent should have to feel that way—especially when there are precautions one can take to avoid this kind of suffering.
After speaking at the international 2008 Congenital CMV Convention held at the Centers for Disease Control and Prevention (CDC) in Atlanta, GA, to a community scientists and families about Elizabeth’s life with CMV, mothers approached me holding their children wearing hearing aids, or pushing them in wheelchairs, and wanted to know the same thing: "Why didn’t my OB/GYN warn me about CMV?"
One OB/GYN was quoted in FitPregnancy magazine (June/July '08) as saying, "The list of things we're supposed to talk about during women's first visit could easily take two hours and scare them to death.” Others simply don’t realize the prevalence of congenital CMV.

In their article, “Washing our hands of the congenital cytomegalovirus disease epidemic,” Drs. Cannon and Davis state: “The virtual absence of a prevention message has been due, in part, to the low profile of congenital CMV. Infection is usually asymptomatic in both mother and infant, and when symptoms do occur, they are non-specific, so most CMV infections go undiagnosed.”
“It is important to remember that CMV is most commonly spread in the family setting. Reason being is that in the home environment, families are more casual about hygiene and for instance may share eating and drinking utensils, food and beverages, or be hurried during diaper change and forget to immediately wash hands afterwards,” states Carol M. Griesser, R. N., Research Nurse and Clinical Coordinator, Congenital CMV Longitudinal Studies, National Congenital CMV Disease Registry, Baylor College of Medicine, Texas Children's Hospital. Griesser suggests ways to keep the home and daycare environment safer: “Unlike some other viruses, cytomegalovirus is a very fragile virus that usually does not live on a surface beyond about 30 minutes time. Active CMV can be destroyed or rendered inactive by washing any contaminated objects with a 10% bleach solution (followed by rinsing the object). Objects that can't withstand the bleach solution disinfectant method, such as stuffed animals and pillows, should be put outside in direct sunlight for about a couple of hours.”
In an effort to warn those who have never heard of congenital CMV, I wrote a light-hearted memoir about my daughter’s life with her lazy, old devoted canine, called, “Anything But a Dog! The perfect pet for a girl with congenital CMV.” It raises funds for CMV research and parent support if purchased through the Registry at www.unlimitedpublishing.com/cmv About.com reviewed Anything But a Dog! saying, "Sheds light on a disorder that is preventable and not talked about enough…If you're an animal lover, you'll love the critter tales as much as the special-needs storyline…really lifted my spirits." To read an excerpt, visit: http://anythingbutadog.blogspot.com/
Please tell everyone about CMV and don’t forget to wash your hands! If you would like to meet moms whose children were born with CMV infection or pick up handouts about CMV prevention, there will be a CMV Awareness table set up at Adventureland Amusement Park on Long Island this Saturday, May 16. If you want to know more about that, visit Lynn Pickus's blog about it at: http://cmvadventureland.blogspot.com/
Sincerely,
Lisa Saunders
Posted by Lisa Saunders at 3:23 AM No comments: