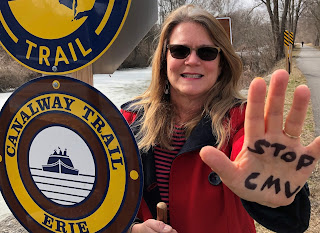 Moms and doctors work to ensure women know how to prevent the leading viral cause of birth defects, cytomegalovirus (CMV).

Want to join us?

Baldwinsville, NY--I was the mother of Elizabeth Saunders, born with a severely damaged brain from congenital cytomegalovirus (CMV) in 1989. She had cerebral palsy, developmental delays, epilepsy, and vision and hearing loss. She died in 2006 during a seizure. When I was pregnant with Elizabeth, I ran a licensed child care center in my home, volunteered in our church nursery, and cared for a toddler of my own--all activities that put my pregnancy at risk for cytomegalovirus (CMV), the leading viral cause of birth defects (cdc.gov​​​).

Women who have or work with young children are at greater risk for CMV because the otherwise healthy toddlers in their care are often excreting the virus--especially those in group care.  When my husband Jim, now a retired Pfizer scientist, and I were living in Connecticut, we helped the state become the second, after Utah, to pass a CMV testing law in 2015. Having moved back to New York in 2019, we were glad to learn the state passed a CMV testing law in 2018 (Bill A587C​), but know more needs to be done in regard to prevention education.

CMV is “'a virus that has a PR problem. It’s the most common congenital infection in every population, happening in 1 out of every 150 babies, yet most pregnant women don’t know about it,'' said Dr. Sallie Permar, Chair, Department of Pediatrics, Weill Cornell Medicine, and pediatrician-in-chief, New York-Presbyterian Komansky Children’s Hospital. "'It’s a virus we have recognized for over 60 years as the cause of birth defects and brain damage in infants...'" (Weill Cornell Medicine, 2021).

Angela Cote of Buffalo appreciates the 2018 New York CMV testing law because it helped doctors diagnose why her daughter Elise failed her hearing test giving her options for early intervention. But  Angela wishes she had known about CMV and how to prevent it before her pregnancy with Elise--especially since Angela had an occupational risk for it. She said, "Not once have I ever heard of CMV or was told about CMV. I was a nanny so I was around children a lot as well as having my daughter, who was a toddler at the time I became pregnant with Elise. Not my OB or any other doctor mentioned or screened me for CMV to see if I had been exposed in the past."

“This is a very common virus, but it remains somewhat under the radar. A woman can unknowingly acquire it during pregnancy, and pass the infection to the unborn baby,” states Sunil K. Sood, M.D., Chair of Pediatrics, South Shore University Hospital, Attending Physician, Infectious Diseases, Cohen Children's Medical Center and Professor, Zucker School of Medicine at Hofstra/Northwell. "CMV is spread from person to person through body fluids. Day care workers, nurses, mothers of young children, and others who work with young children are at greatest risk of exposure to CMV. Since young children commonly carry CMV, pregnant women and women planning pregnancies should take extra care to avoid urine and saliva from young children” (NYMetroParents, 2016).

CMV prevention tips ​from the Centers for Disease Control and Prevention (CDC) state:  "The saliva and urine of children with CMV have high amounts of the virus. You can avoid getting a child’s saliva in your mouth by, for example, not sharing food, utensils, or cups with a child. Also, you should wash your hands after changing diapers" (https://www.cdc.gov/cmv/fact-s...)​

Racial and ethnic minorities are particularly at risk for CMV:  "Significant racial and ethnic differences exist in the prevalence of cCMV [congenital CMV], even after adjusting for socioeconomic status and maternal age" (Fowler et al., 2018).

In 2021, the State of New York Senate hoped to helped raise awareness of CMV by passing Senate Bill S6287A, which  "Establishes 'Elizabeth's law'; requires child care providers to be trained on the impacts and dangers of congenital cytomegalovirus infection and the treatments and methods of prevention of cytomegalovirus infection; requires distribution of materials relating to cytomegalovirus by certain physicians." The NY Assembly still needs to pass their version of the bill (A7560).

Brandi Hurtubise of Buffalo supports "Elizabeth's Law." Her second child Samantha was born with congenital CMV. Brandi told her story to the National CMV Foundation​: "No one told me I shouldn't share drinks or food with my toddler while I was pregnant with [Samantha]. Or that I needed to wash my hands after every single diaper change. That I needed to be cautious of his saliva and urine because it could be carrying a virus that would harm my unborn baby. I didn't know because CMV isn't commonly talked about or educated on; even though it is incredibly common."

Edel Law of Tappan said, "This bill is important to me because my three-year-old daughter has congenital CMV. It came as a total shock when at 31 weeks pregnant, I found out she had abnormal brain development. Upon further testing, we found out I had contracted and passed CMV onto my daughter. After learning about CMV, it was not shocking that I contracted the virus since I had a toddler in preschool and was an early childhood educator. My daughter has developmental delays, single sided deafness, wears a cochlear implant, and has a form of heart failure."

New York proclaimed June 2021 as Cytomegalovirus Awareness Month (Assembly Resolution No. 346​). To kick it off, Trail Works, Inc., hosted an event at its Trail of Hope in Lyons on June 5.  A co-sponsor of the Proclamation, Assemblyman Brian Manktelow, reading the entire Proclamation aloud, including the statement: "It is imperative that women are educated  about  the  virus itself  and  simple preventative measures, such as not sharing food with toddlers, and washing one's hands after changing  infants  and  toddlers diapers..." The reading concluded with  220 rocks painted silver (the official color of CMV awareness) placed on the Trail to honor the number of babies born disabled by congenital CMV in New York each year. Kristin Schuster of Canandaigua, mother of Autumn born in 2015 with congenital CMV, painted many of these rocks and, per requests from families unable to attend, wrote the names of 70 children born disabled by CMV on the rocks. Her daughter Autumn tried to help us place the silver rocks on Trail. Jessica Keukelaar of Macedon was in attendance with her first born daughter, Kyleigh, born with congenital CMV in 2018. Like Kristin and myself, Jessica worked professionally with young children during her pregnancy unaware of her occupational risk for CMV. Tabitha Rodenhaus of Buffalo, the mother of a child with congenital CMV, painted #StopCMV rocks for inclusion on the Trail of Hope (watch music video of the event: "Had I Known, Lyrics and Music by Debra Lynn Alt," produced by Mark De Cracker, June 2021)​.

Jim and I continue to place the #Stop CMV rocks along the 360-mile Erie Canalway Trail as we walk across upstate New York trying to raise awareness.

To learn more about protecting pregnancies from CMV, visit the CDC at: www.cdc.gov/cmv and the National CMV Foundation. If you would like to join the effort to help all women of childbearing age in New York learn CMV prevention, please write to me at LisaSaunders42@gmail.com or visit: Congenitalcmv.blogspot.com or Facebook: NY Stop CMV Project. Educational resources below my bio.

Lisa Saunders resides in Baldwinsville, New York, with her husband James P. Saunders, a recently retired Pfizer scientist. Lisa is a founding member of the NY Stop CMV Project and volunteers with the National CMV Foundation. In 2015, she was instrumental in helping Connecticut become the second state in the U.S. to require CMV testing for newborns who fail their hearing screen. A graduate of Cornell University, Lisa is a public speaker, a talk show host for  PAC-B TV and an award-winning writer. She is the author of several books, including some with a CMV prevention message for children and adults. Lisa and her husband Jim are walking the 360-mile Erie Canalway Trail across upstate New York in hopes of drawing attention to CMV prevention. (Watch Lisa and Jim on Spectrum News: "Couple pushes for law in memory of their daughter" by Jessica Houghtaling, Jul. 01, 2021.

The following six reasons explain why CMV has a "PR problem"

Posted by Lisa Saunders at 8:35 AM No comments: