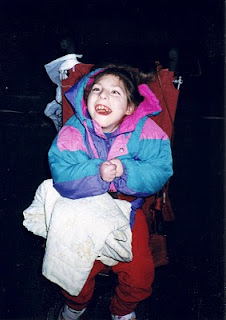 The moment I gave birth to my daughter Elizabeth in December of 1989, I felt a stab of fear—her head was so small, so deformed. Within 12 hours, I was told she had been profoundly disabled by congenital CMV (cytomegalovirus). The neonatologist said, “If she lives, she will never roll over, sit up, or feed herself.” He was right.

How and why did I catch this virus that I had barely heard of? According the Centers for Disease Control and Prevention (CDC), congenital CMV is the #1 viral cause of birth defects--causing more disabilities than Down syndrome. CMV is spread through bodily fluids such as saliva and urine. Women who care for young children are at a higher risk for catching it because preschoolers are the majority of carriers. (Nurses do not seem to be in the risk category because they practice diligent hand-washing and aren’t kissing their patients around the mouth or sharing utensils with them.) While I was pregnant with Elizabeth, I not only had a toddler of my own, but also ran a licensed daycare center in my home. I felt sick at what my ignorance had done to my little girl. In milder cases, children with congenital CMV may lose hearing or struggle with learning disabilities later in life. But Elizabeth's case was not a mild one.

I took about a year, but with the help of friends and family, prescription sedatives, and the Book of Psalms, I was able to accept Elizabeth’s disabilities and love her the way she was. Our family moved forward as a happy one.

Sixteen years after Elizabeth’s birth, I awoke on her birthday feeling so proud of her. She had fought hard to stay with us, surviving several bouts of pneumonia, seizures and surgeries. Weighing only 50 pounds, she looked odd to strangers as a result of her small head and big adult teeth, but she was lovely to us with her long, thick brown hair, large blue eyes and soul-capturing smile. Although Elizabeth was still in diapers, and could not speak or hold up her head, she was a very happy little girl, with a love of adventure— long car rides being one of her favorite activities. She especially loved going to school and being surrounded by people, paying no mind to the stares of other children who approached her in public. She smiled at anyone who would stroke her hair or cheek. When she wasn't busy, she sat propped on our couch watching cartoons with a big, lazy dog we got from an animal shelter.

Two months after her 16th birthday, Elizabeth died suddenly during a seizure. Holding her body in his arms and looking into her lifeless eyes, my husband, Jim, cried, "No one is ever going to look at me again the way Elizabeth did." Now our girl would be forever "sweet sixteen."

Back in 1989, when I was pregnant with Elizabeth, my OB/GYN hadn't warned me about CMV or how to prevent it--and much to my anguish, in 2010, they still don't.

When I spoke at the international 2008 Congenital CMV Convention held at the Centers for Disease Control and Prevention (CDC) in Atlanta, GA, to a community of scientists and families about Elizabeth’s life with CMV, mothers approached me after my speech, holding their young children wearing hearing aids, or pushing them in wheelchairs, and wanted to know the same thing: "Why didn’t my OB/GYN warn me about CMV?"

One OB/GYN was quoted in FitPregnancy magazine (June/July '08) as saying, "The list of things we're supposed to talk about during women's first visit could easily take two hours and scare them to death.” Others simply don’t realize the prevalence of congenital CMV.

In their article, “Washing our hands of the congenital cytomegalovirus disease epidemic,” Drs. Cannon and Davis state: “The virtual absence of a prevention message has been due, in part, to the low profile of congenital CMV. Infection is usually asymptomatic in both mother and infant, and when symptoms do occur, they are non-specific, so most CMV infections go undiagnosed.

”More than half of OB/GYNs surveyed by the American College of Obstetricians and Gynecologists (ACOG) in 2007 admitted they don't routinely caution their patients about CMV despite these figures from the CDC:
• Every hour, congenital CMV causes one child to become disabled
• Each year, about 30,000 children are born with congenital CMV infection
• About 1 in 750 children is born with or develops permanent disabilities due to CMV
• About 8,000 children each year suffer permanent disabilities caused by CMV (See: www.cdc.gov/cmv).

Examples of symptoms or disabilities caused by congenital CMV:


According a 2006 survey reported in the article, "Knowledge and Awareness of Congenital Cytomegalovirus Among Women," of the 643 women surveyed about their CMV awareness, only 22% had heard of it and most of those could not correctly identify modes of CMV transmission or prevention.

Reduce Chances of Contracting CMV:
· Refrain from kissing children around the mouth--give them a big hug and a kiss on the top of the head instead.
· Refrain from sharing food and utensils with others, especially children.
· Wash your hands diligently with soap and water after wiping runny noses, changing diapers, picking up toys, etc. If soap and water are not available, use alcohol-based hand gel.

“It is important to remember that CMV is most commonly spread in the family setting. Reason being is that in the home environment, families are more casual about hygiene and for instance may share eating and drinking utensils, food and beverages, or be hurried during diaper change and forget to immediately wash hands afterwards,” states Carol M. Griesser, R. N., Research Nurse and Clinical Coordinator, Congenital CMV Longitudinal Studies, National Congenital CMV Disease Registry, Baylor College of Medicine, Texas Children's Hospital. Griesser suggests ways to keep the home and daycare environment safer: “Unlike some other viruses, cytomegalovirus is a very fragile virus that usually does not live on a surface beyond about 30 minutes time. Active CMV can be destroyed or rendered inactive by washing any contaminated objects with a 10% bleach solution (followed by rinsing the object). Objects that can't withstand the bleach solution disinfectant method, such as stuffed animals and pillows, should be put outside in direct sunlight for about a couple of hours.”

•Elizabeth’s big sister, Jackie Saunders, summarized my work to Stop CMV on my congenital CMV blog: http://congenitalcmv.blogspot.com/ I also:
•Write to magazine/newspaper editors asking if they’d like to feature CMV
•Write to producers about my/others willingness to speak on T.V. about CMV
•Write letters to elected officials asking for a CMV education campaign
•Published free e-book, How to Get Published, to make available an excerpt of Anything But a Dog! The perfect pet for a girl with congenital CMV
•Run “Open Mike Nights” to read aloud my CMV prevention articles
•Use Youtube. Twitter, Facebook, and LinkedIn to raise awareness.
•Submit articles about CMV to newspapers/online publications
•Post CMV info on social networking sites like momslikeme.com
•Offer myself and others as public speakers on CMV. My PowerPoint includes photos of Elizabeth: http://docs.google.com/present/edit?id=0AdKlfxar2CmjZGdjcjZienZfOTBkZjNmejZmeA&hl=en
•Add my voice to CMV parents and the general public at: http://www.stopcmv.org/
•My book, Anything But a Dog! raises CMV awareness and funds for the National Congenital CMV Disease Registry if purchased through their site.


How you can help stop CMV:
1. Print out the brochures and flyers found on CDC Web pages and at http://www.stopcmv.org/ and ask your doctors to post them on their walls and/or hand out. http://stopcmv.org/images/stopcmvnewflyer.pdf

3. Write letters to your elected officials asking them to promote an educational campaign (my CMV blog includes a sample: http://congenitalcmv.blogspot.com/2009/04/prevent-1-birth-defects-virus.html).

4. Donate to an organization that supports CMV research, disseminates information and provides a parent support group, by contacting the National Congenital CMV Disease Registry at (832) 824-4387 or visit www.bcm.edu/pedi/infect/cmv

5. In an effort to warn those who have never heard of congenital CMV, I wrote a light-hearted memoir about my daughter’s life with her lazy, old devoted canine, called, “Anything But a Dog ! The perfect pet for a girl with congenital CMV.” It includes interviews with the country's leading CMV experts and raises funds for CMV research if purchased through the National CMV Disease Registry at www.unlimitedpublishing.com/cmv Some have purchased copies to donate to their local libraries in order to raise CMV awareness in their area.

The STOP CMV parent action network: http://www.stopcmv.org/
(has a good, one-page flyer for posting in offices at: http://stopcmv.org/images/stopcmvnewflyer.pdf)

Articles and Studies:
To read about my CMV awareness work along with advice from internationally known CMV experts, visit the Times Herald Record article: www.recordonline.com/apps/pbcs.dll/article?AID=/20090121/HEALTH/901210313

For more information about congenital CMV and how you can protect your pregnancy, contact Gail J Demmler MD, Professor of Pediatrics at Baylor College of Medicine, Director of Congenital CMV Disease Registry, Clinic and Research Program at gjdemmle@texaschildrenshospital.org
or visit: www.bcm.edu/pedi/infect/cmv. The Registry supports CMV research, disseminates information and provides a parent support group. Registry: (832) 824-4387.

The other 2008 Congenital CMV Conference co-sponsor, CMV Foundation founder, Lenore Pereira, Ph.D., Professor, Microbiology and Virology, Cell and Tissue Biology Department, University of California San Francisco, can be reached at lenore.pereira@ucsf.edu, or visit www.congenitalcmv.org/ which includes Members of the Scientific Advisory Committee with their contact information. Dr. Pereira has studied immune responses to CMV infection and molecular biology of viral glycoproteins for over 25 years. To learn more about the work of the country’s leading CMV experts, visit: http://www.congenitalcmv.org/foundation.htm

Your Child Disable by CMV?

Contact other CMV parents for advice or simply “chat” at: http://listserv.syr.edu/scripts/wa.exe?A0=cmv

Join the STOP CMV Action Network and read each other’s stories at: http://www.stopcmv.org/