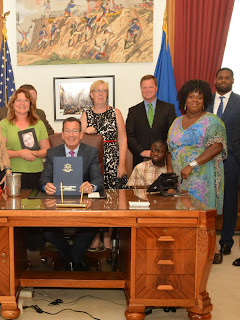 Racial and Ethnic Minorities at Higher Risk for Cytomegalovirus (CMV),

Racial and ethnic minorities are particularly at risk for CMV. The authors of  Geographic Disparities in Cytomegalovirus Infection During Pregnancy state, "Cytomegalovirus (CMV) is the most common infectious cause of fetal malformations and childhood hearing loss. CMV is more common among socially disadvantaged groups, and it clusters geographically in poor communities" (Lantos et al, 2017).  "We found a high prevalence of CMV seropositivity in urban low-income neighborhoods among pregnant women, particularly among racial and ethnic minorities. Seronegative pregnant women from these communities might be at heightened risk for primary CMV infection."

Another study concluded: "Significant racial and ethnic differences exist in the prevalence of cCMV [congenital CMV], even after adjusting for socioeconomic status and maternal age" (Fowler et al. ,Racial and Ethnic Differences in the Prevalence of Congenital Cytomegalovirus Infection, 2018).
Most women don't hear about CMV until it's too late to help their newborns. Mothers, caregivers and teachers of toddlers are at higher risk for contracting CMV because the young children in their care may be excreting CMV in their saliva and urine. Congenital CMV (cCMV) is the "most common non-genetic cause of birth defects and the leading cause of sensorineural hearing loss. Shockingly, 91% of women have never heard of cCMV, despite its prevalence..." (Colleran, 2020).
Because CMV prevention is not part of a doctor's "standard of care" in the U.S., it's been left up to families affected by CMV to raise awareness by urging legislators to pass CMV education and testing laws and by urging Public Health Departments to teach prevention.
Although I (Lisa Saunders, pictured above) was at high risk for contracting CMV during my pregnancy because I had a toddler, was a licensed in-home childcare provider and was a church nursery volunteer, I was never educated about it. My daughter Elizabeth was born with a severely damaged brain in 1989 because I contracted CMV when pregnant--probably early in my pregnancy. Elizabeth died at age 16 in 2006 during a seizure. I have been trying for over 30 years, along with other families affected by CMV, to shout CMV prevention from the rooftops.

According to the CDC, CMV "is a common virus that infects people of all ages. Over half of adults have been infected with CMV by age 40. Most people infected with CMV show no signs or symptoms. When a baby is born with cytomegalovirus (CMV) infection, it is called congenital CMV. About one out of every 200 babies is born with congenital CMV infection. About one in five babies with congenital CMV infection will have long-term health problems" (cdc.gov/cmv). These health problems include hearing loss, intellectual disability, vision loss, seizures, and lack of coordination or weakness.

The American College of Obstetricians and Gynecologists states, "CMV can be spread by contact with an infected child's urine or other body fluids. Pregnant women who work with young children, such as day care workers or health care workers, should take steps to prevent infection, including wearing gloves when changing diapers. Frequent handwashing also is recommended. Pregnant women with young children at home also are at risk and should take these steps"(acog.org).

"Approximately 1-4% of all pregnant women will experience a primary CMV infection during their pregnancy. If you work in a child care setting, the risk increases to approximately 10%. If you have a toddler at home who is actively infected with CMV and shedding CMV in their saliva or urine, the risk is even higher, approaching 50% in some studies" (Gail J. Demmler-Harrison, MD, "CMV In Pregnancy: What Should I Know?," 2014).

When I lived in Connecticut, I helped get a CMV law passed in 2015 to combat the virus. Since moving to New York in 2019, I have been trying to educate residents about CMV prevention by sharing these tips from the CDC: "You may be able to lessen your risk of getting CMV by reducing contact with saliva and urine from babies and young children. The saliva and urine of children with CMV have high amounts of the virus. You can avoid getting a child's saliva in your mouth by, for example, not sharing food, utensils, or cups with a child. Also, you should wash your hands after changing diapers" (cdc.gov/cmv). Other prevention tips include washing hands after picking up toys (nationalcmv.org).

Please help prevent CMV or tell me how I can help you. Attached is a photo of the ceremonial signing of the Connecticut CMV law that passed. It tests newborns for CMV if they failed their hearing test.
A lot needs to be done in regard to CMV prevention, however, in all states.
Lisa Saunders 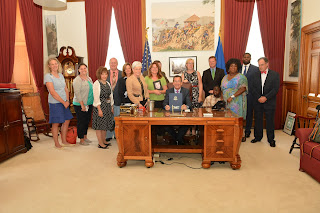