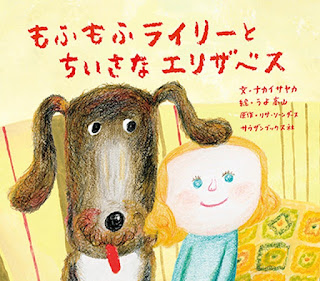 "Riley and Elizabeth," about an old rescue dog and his quadriplegic girl, raises awareness of disabilities caused by cytomegalovirus (CMV)

Baldwinsville, New York--Author Lisa Saunders collaborated with TORCH Association Japan to create the family-friendly picture book, "Riley and Elizabeth" (Thousands of Books, Inc., November 2021). Based on the true story of Lisa's daughter and her dog, the goal of TORCH Association Japan is to place the book in doctor's offices and hospitals so the public can learn how to prevent birth defects caused by TORCH infections (TORCH stands for: Toxoplasmosis, Other infections, Rubella, Cytomegalovirus, and Herpes simplex virus). Japanese citizens and a number of practicing doctors raised funds to produce and distribute the book.

Tomomi Watanabe, founder of TORCH Association Japan, thought that an appealing, illustrated book about a girl and her dog would make it easier for the general public to pick up while waiting to be seen by doctors. Tomomi wants everyone to know how to prevent infections that cause birth defects. She stated, "All Japanese people know that tobacco and alcohol have an adverse effect on the fetus. In order to bring mother-to-child infection transmission to the same level, I think it is necessary to educate the public long before they become pregnant so prevention becomes a life-long habit."

Wanting to sow seeds of interest in birth defect prevention in a creative way, Tomomi thinks the artwork in "Riley and Elizabeth" will attract people who like animals and to read to children. The dog in the story doesn't tell the reader why the little girl is in a wheelchair, can't move her limbs, can't speak and goes to special education school. Tomomi wants people to wonder why the little girl is the way she is and hopes they will read the educational portion of the book.

Sayaka Nakai of Tokyo, the English -Japanese book translator with Thousand Books Project Team, edited Lisa Saunders's adult book, "Elizabeth and the Miracle Dog Riley" in a way to create a captivating tale for children, choosing to write it from the dog's perspective. Having spent her junior and high school days in New York City, Sayaka understands the heart of this American story and was able to relate it to a new audience--Japanese children and their families. Sayaka said, "I wanted the story of Elizabeth and Riley to live on, so I wrote the picture book."

Lisa Saunders said, "My grandchildren are big fans of Japanese stories, and my granddaughter Elizabeth (named in memory of my daughter), named my fish after a Japanese character, so I am thrilled to share our story with a Japanese audience. I thought it was so clever of Sayaka Nakai to tell the story of my daughter Elizabeth from her dog's perspective. She started it with: 'I'm Riley. This is my favorite Elizabeth. This is the story of me, Elizabeth, and my dad, mom, and Jackie.'"

Lisa hopes the Japanese publisher will create an English version of "Riley and Elizabeth" so the English-speaking public will learn more about cytomegalovirus (CMV) and Toxoplasmosis from Elizabeth's old rescue dog. She says, "The charming illustrations truly capture the spirit of Elizabeth and Riley--and the rest of our family!"

Illustrator Uyo Takayama, born in Tokyo, has won several awards, including the Best of Best Award at the 2021 Brightness Illustration Competition. "While I was drawing 'Riley and Elizabeth,' I felt like Riley was there for me. I wanted to make this picture book something that people can enjoy for a long time."

Lisa is currently asking New York residents to write to their assembly members asking them to support "Elizabeth's Law," named in memory of her daughter, so that women will be educated on how to prevent CMV. Click to read the Memo of Support: "Elizabeth's Law"--A7560 (Rosenthal. L.) / S6287A (Mannion, J.).

To learn more about CMV, Toxoplasmosis, and other infections, visit: https://www.cdc.gov/pregnancy/infections.html

To learn more about Riley and Elizabeth, visit: http://thousandsofbooks.jp/project/elizabeth/. To see the first few pages of the picture book: https://hanmoto9.tameshiyo.me/9784909125323.

Saunders shared her thoughts with the creators of Riley and Elizabeth for the publisher’s book launch party in November 2021 in the following video: https://drive.google.com/file/d/1JR9_Xwvte8jB9MM5YNOeod05HpL4DhF4/view?usp=sharing”

If you do not speak Japanese and want to reach the Japanese publisher about the book, contact:

Posted by Lisa Saunders at 5:08 AM No comments: