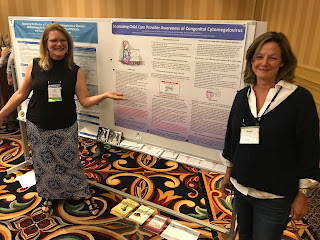 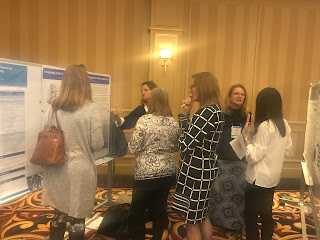 Presented at: CMV Public Health and Policy Conference, September 23-25, 2018 (poster session: Mon., Sept 24, 2018), DoubleTree Hotel, Burlington, Vermont: https://cmv.usu.edu/schedule.cfm
Click for poster as a PDF document or PowerPoint slide.
Click for PDF of What You Can Do to Help and References or see below:

ØThere are 562,420 child care workers in the U.S.(Dept. of Labor, 2017).
ØEvery year, 8 - 20% of child care providers contract CMV (AAP, 2012) as compared to 1-4% of women in the general population (CDC, 2018).
Ø“7 in 10 children (70 percent) between 1 and 3 years of age who go to day care may have CMV. They can pass it on to their families, caretakers and other children” (March of Dimes).
ØSixty one percent “of children under the age of 5 are cared for in a child care facility” (Thackeray and Magnusson, 2016).
ØMothers of toddlers in group care are also at increased risk for CMV        (Pass and Hutto, 1986).ØMany child care providers use diaper wipes to clean, but diaper wipes do not kill CMV (Thackeray and Magnusson, 2016).
ØMost child care providers have never heard of CMV despite recommendations from the American Academy of Pediatrics (AAP): “Staff of childbearing age who care for infants and children should be provided the following information...The availability of counseling and testing for serum antibody to CMV to determine the caregiver/teacher’s immune status...child care staff members should receive counseling in regard to the risks of acquiring CMV from their primary health care provider. However, it is also important for the child care center director to inform infant caregivers/teachers of the increased risk of exposure to CMV during pregnancy” (AAP et al., 2017).ØLicensed child care providers are typically trained in first aid, CPR, etc., to ensure the health of children in their care. CMV prevention can be included in training on infectious diseases.

“I was a licensed child care provider and the mother of a toddler yet I didn’t know about CMV. I always washed my hands after changing diapers, but often too busy chasing toddlers to get to the sink after wiping noses and picking up toys, I used diaper wipes to clean my hands not realizing they didn’t kill CMV.”
Lisa Saunders, mother of Elizabeth born with congenital CMV in 1989.

Ø2016: Only 9 % of women surveyed in the general population have heard of CMV (Doutre et al., 2016).
Ø2016: Only 18.5% of licensed “in-home” daycare providers surveyed have heard of CMV and “Providers do not know how to appropriately sanitize surfaces to reduce spread of disease” (Thackeray and Magnusson, 2016).
Ø2018: A nationwide child care survey confirmed: "Consistent with previous research, child care providers do not have knowledge regarding CMV or cCMV" (DeWald et al., 2018).

ØCMV prevention education is not part of a doctor’s “standard of care”.
ØThere is no nationwide child care licensing program to enforce education and methods of CMV control: "Education and training requirements vary by setting, state, and employer" (Dept. of Labor, 2018).

WORKER PROTECTION IS THE LAW OF THE LAND

Under the Occupational Safety and Health Act of 1970 (OSH Act), workers have the right to “receive information and training about hazards” (OSHA, 2016). CMV is also a bloodborne pathogen.

WHY CMV IS A PROBLEM FOR CHILD CARE PROVIDERS

ØLicensed child care providers already have a protocol for sanitizing hands and surfaces but must understand the need to diligently follow this protocol. “Increasing risk perception is important because providers may not be concerned about taking measures to reduce the probability of infection if they feel that they are at low risk” (Thackeray and Magnusson, 2016).
Ø“Small children have habits that facilitate the dissemination of diseases, such as putting their hands and objects in their mouths, very close interpersonal contact…(Nesti et al, 2007).
ØMany caregivers use diaper wipes to clean. “Viable CMV was recovered from 4/20 hands 10 min after diaper wipe cleansing. CMV remains viable on hands for sufficient times to allow transmission.” When soap and water are not available, hand sanitizer may be used: “After cleansing, no viable virus was recovered using water (0/22), plain soap (0/20), antibacterial soap (0/20), or sanitizer (0/22)”
(Stowella et al., 2014).
ØChild care providers don’t always have access to a sink:
“As a child care worker, I remember being pregnant and eating snacks and lunch on the playground without washing my hands first.”  Jessica Rachels of the Idaho CMV Advocacy Project, former child care provider and mother of Natalie born with congenital CMV in 2006.


In five studies published between 1993 and 2015, the efficacy of hygienic precautions in CMV seronegative pregnant women was shown to be greater than 75% (Adler, 2015).

WOMEN SHOULD LEARN ABOUT CMV BEFORE PREGNANCY

Ø“Women who are exposed to CMV prior to conception or within the first trimester of pregnancy and seroconvert have increased risk of their infant being infected with CMV” (Thackeray and Magnusson, 2016).
ØForty-nine percent of pregnancies are unplanned—“Unintended pregnancy is associated with an increased risk of problems for the mom and baby. If a pregnancy is not planned before conception, a woman may not be in optimal health for childbearing” (CDC).

WHAT OTHER COUNTRIES ARE DOING ABOUT CMV IN CHILD CARE

ØIn Germany, “to protect [day care workers] from primary infection, their CMV serostatus must be checked at the beginning of their pregnancy. When the [day care worker] is seronegative, she is excluded from professional activities with children under the age of three years in order to prevent feto- or embryopathy in her offspring“
(Stranzinger  et al., 2016).
ØIn Queensland, Australia, they relocate workers who are pregnant, or expect to become pregnant, to care only for children over two years old in order to reduce contact with urine and saliva
(Queensland Government, Australia, 2017).
ØIn New South Wales, Australia, in a landmark decision, a childcare worker and her severely disabled son were awarded $4.65 million. A Court of Appeal ruled that the child's disabilities resulted from the woman being infected with cytomegalovirus (CMV) at work (Hughes v SDN Children's Services 2002)” (Queensland Government, Australia, 2017).

CONCLUSION
ØBecause it is not a doctor’s “standard of care” to educate women about CMV, child care licensing programs can reach a large number of high risk women.
Ø"Women at highest risk are those caring daily for children less than 24 months of age. These women, should they become pregnant, should either request to care for children over age 2 years for the duration of pregnancy or be tested for IgG antibodies to CMV. If they lack antibodies to CMV (immunity) they should care for children over age 2 years for the duration of pregnancy. If this is not possible they should carefully follow hygienic precautions and be retested for CMV monthly for the first 5 months of pregnancy,“ states Stuart P. Adler M.D, Director, CMV Research Foundation.
Ø“Intervening with child care providers and parents through child care facilities are key opportunities to reduce prevalence of CMV infection and other diseases” (Thackeray and Magnusson, 2016).
ØCongenital CMV has been estimated to cost the US health care system $1.86 billion annually, with a cost per child of more than $300,000 (Modlin et al., 2004). Since prevention education has been shown to reduce the spread of CMV by more than 75%, improving a child care provider’s awareness of CMV could mean a substantial savings to the US health care system.

WHAT YOU CAN DO TO HELP

•        Contact your state’s Departments of Health, Labor, OSHA, and Child Care Licensing (found at: childcareaware.org/providers), and ask for CMV education to be featured on their websites. Ask that CMV education be included in the training child care providers receive on infectious diseases.
•        CMV flyer links are available at the CDC, National CMV Foundation, some state websites, and CongenitalCMV.blogspot.com. The “Staff Education and Policies on Cytomegalovirus” in Caring for Our Children can be found at: nrckids.org/CFOC/Database/7.7.1.1
•        Child care directors may worry about frightening their workers. Remind them they probably already have proper sanitizing procedures in place through compliance with protocols set forth by the National Association for the Education of Young Children (NAEYC), which states, “Procedures are in place that address steps to reduce occupational hazards such as infectious diseases (e.g., exposure of pregnant staff to CMV…)" (NAEYC, 2014, p.90).
•        Contact state chapters of organizations that promote the health of their members such as child care and teacher unions, NAEYC, Early Head Start programs, and child care centers. Offer CMV flyers or links to them.
•        In 2015, Connecticut passed a law requiring CMV testing when an infant fails the hearing screen. Prevention education did not pass, but the Connecticut Office of Early Childhood’s Division of Licensing for Child Care Providers/Operators now includes “Congenital Cytomegalovirus” under “Disease and Prevention” on its website. We are still working on making CMV training mandatory for child care providers.

Adler refers to five prevention education studies in his article, “Prevention of Maternal–Fetal Transmission of Cytomegalovirus” (2015). They are:

"Prevention of Maternal–Fetal Transmission of Cytomegalovirus"