Why did my daughter die? 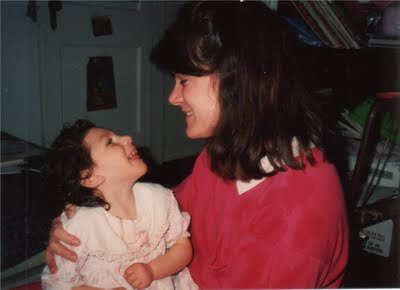 Why did my daughter die? Because I didn't know about congenital CMV (cytomegalovirus) prevention.

Expecting our second child, due to arrive Christmas Eve of 1989, had been an exciting experience. What a Christmas present! But the moment Elizabeth was born on December 18th, I felt a stab of fear. My immediate thought was, “Her head looks so small–so deformed.

The neonatologist declared, "Your daughter has profound microcephaly — her brain is very small with calcium deposits throughout. If she lives, she will never roll over, sit up, or feed herself." He concluded that Elizabeth's birth defects were caused by congenital cytomegalovirus (CMV) — a virus that may have no symptoms for the mother.

The Centers for Disease Control and Prevention (CDC) estimates that about one in 150 children is born with CMV infection and approximately one in 750 is born with or develops permanent disabilities because of it. CMV is the #1 viral cause of mental retardation and hearing loss—more common a cause of disabilities than Down syndrome. Women who care for young children are at a higher risk for catching it because preschoolers are the majority of carriers. Pregnant women need to be careful not to kiss young children on or around the mouth or share food or towels with them. Hands must be washed after wiping runny noses, diaper changes, etc. Why hadn’t my OB/GYN warned me about this?

While I was pregnant with Elizabeth, I not only had a toddler of my own, but also ran a licensed daycare center in my home. I felt sick at what my ignorance had done to my little girl. In milder cases, children with congenital CMV may lose hearing or struggle with learning disabilities later in life. But Elizabeth's case was not a mild one.

“My life is over,” I thought. I asked God to heal her instantly, but He didn’t. So, I begged him to kill me and prayed to be crushed to death in an earthquake. I just couldn’t handle raising such an afflicted child, period.

Thankfully my husband Jim’s love for Elizabeth far outweighed his grief. He said, “She needs me. I want to protect her from this cruel world she has been born into.” He was just like Charlie Brown with that pathetic Christmas tree.

It took about a year, but I eventually stopped praying that a nuclear bomb would drop on my house so I could escape my overwhelming anguish. Life did become good again--but it took a lot of help from Jim, family, friends, the Book of Psalms, and a couple of Valium! When Elizabeth finally figured out how to look into my eyes, she smiled—and I was hooked.

On Elizaeth's 16th birthday, I awoke feeling so proud of her. How hard she fought to remain with us in the land of the living–overcoming several battles with pneumonia, major surgeries and most recently, seizures. Weighing only 50 pounds, she looked funny to strangers as a result of her small head and big adult teeth, but she was lovely to us with her long, thick brown hair, large blue eyes and soul-capturing smile. Although Elizabeth was still in diapers, and could not speak or hold up her head, she was a very happy young lady with a love of adventure-- long car rides being one of her favorites. She especially enjoyed going to school and being surrounded by people, paying no mind to the stares of “normal” children.

At the end of the day, I got the call I had always feared. “Mrs. Saunders, Elizabeth had a seizure and she’s not breathing. We called 911.”

The medical team did all they could, but she was gone. While holding Elizabeth on his lap, my husband looked down into her partially open, lifeless eyes and cried, “No one is ever going to look at me again the way Elizabeth did.” I knew he was right. No one adored us as Elizabeth did.

Thank you for reading about Elizabeth.

P.S. In an effort to record the fun I had raising Elizabeth beside her tomboy sister, Jackie, I wrote the book, “Anything But a Dog! The perfect pet for a girl with congenital CMV.” It is the unusual story of how a homeless, old dog found his way to Elizabeth's couch. The book concludes with tips for preventing congenital CMV from the country’s leading CMV experts and gives information on emerging treatments for women who find they have contracted CMV while pregnant. Available through the National Congenital Disease Registry, “Anything But a Dog!” raises funds for congenital CMV parent support and research if purchased through: http://www.unlimitedpublishing.com/cmv/

To see photos of Elizabeth growing up, please visit my website at: http://www.authorlisasaunders.com/
Posted by Lisa Saunders at 1:48 PM 1 comment:

Stop CMV From Hurting Your Baby

Yesterday, the Centers for Disease Control and Prevention (CDC) highlighted how to prevent the #1 viral cause of birth defects, congenital CMV (cytomegalovirus), on their homepage. According to the CDC, "In the U.S. more children have disabilities due to congenital cytomegalovirus (CMV) infection than other conditions present at birth."

I hope the CDC's work toward reducing congenital CMV will encourage OB/GYNs to make CMV prevention a part of their standard practice of care so women of child-bearing age will know how to reduce their chances of contracting it—namely by not sharing utensils with young children or kissing them around the mouth, and through careful hand-washing.

I didn’t know about CMV prevention until my daughter, Elizabeth, was born severely disabled by the virus in 1989. Though a happy little girl, Elizabeth had cerebral palsy and epilepsy, and was mentally, visually and hearing impaired. She died in 2006 at the age of 16 during a seizure. Elizabeth was profoundly affected by CMV, but other children's symptoms aren't so severe--but that doesn't remove the anguish of mothers who didn't know about CMV prevention until it was too late for their child.

When I spoke at the international 2008 Congenital CMV Conference at the CDC in Atlanta, GA, mothers came up to me afterwards with their children in wheelchairs or wearing hearing aids, and asked, “Why didn’t my OB/GYN warn me how to protect my baby from CMV?”

In the article, “Washing our hands of the congenital cytomegalovirus disease epidemic,” Drs. Cannon and Davis state: “The virtual absence of a prevention message has been due, in part, to the low profile of congenital CMV. Infection is usually asymptomatic in both mother and infant, and when symptoms do occur, they are non-specific, so most CMV infections go undiagnosed.”

According to a 2006 survey reported in the article, "Knowledge and Awareness of Congenital Cytomegalovirus Among Women," of the 643 women surveyed about their CMV awareness, only 22% had heard of it and most of those could not correctly identify modes of CMV transmission or prevention.

To reduce chances of contracting congenital CMV, women of childbearing age should:
· Refrain from kissing children around the mouth--give them a big hug and a kiss on the top of the head instead.
· Refrain from sharing food and utensils with others, especially children.
· Wash hands diligently with soap and water after wiping runny noses, changing diapers, picking up toys, etc. If soap and water are not available, use alcohol-based hand gel.

Lenore Pereira, PhD, Founder of the Congenital Cytomegalovirus Foundation, University of California, San Francisco, said, “Ultimately, we hope that awareness will lead to universal testing of pregnant women and their babies, improved therapies, and vaccines for prevention of disease.”

In an effort to raise a congenital CMV prevention message, I wrote a light-hearted memoir about raising my daughter Elizabeth alongside her big, tomboy sister and a series of dysfunctional pets. It includes the unusual story of how a 100-pound, homeless dog found his way to Elizabeth’s couch plus interviews with the country’s leading CMV experts who speak about CMV prevention and emerging treatments. Anything But a Dog! The perfect pet for a girl with congenital CMV raises funds for CMV research and parent support at the National Congenital CMV Disease Registry if purchased through this link.

For more information about congenital CMV or how you can protect your pregnancy, contact Gail J Demmler MD, Professor of Pediatrics at Baylor College of Medicine, and the Director of the Congenital CMV Disease Registry, Clinic and Research Program. The Registry, located in Houston, TX, supports CMV research, disseminates information and provides a parent support group. Phone: (832) 824-4387.

To learn more about my daughter's life with CMV, her dog, and CMV prevention, see my television interview on USA 9 News.

How you can help stop CMV:
1. Print out the brochures and flyers found on the CDC website and at Stop CMV--The Action Network. Ask your doctors to post them on their walls or hand them out. The Stop CMV--the Action Network website has CMV awareness flyers available in several languages. Click here for the English one.

2. Write letters to the editors of magazines, your local newspapers and broadcast media (my Congenital CMV blog includes samples).

The next International Conference on Congenital CMV will be held in San Francisco, CA, in 2012.
Posted by Lisa Saunders at 4:38 AM 2 comments: