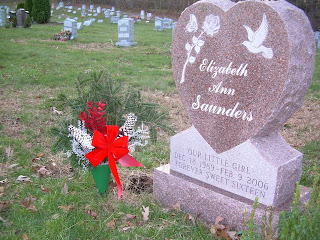 My daughter Elizabeth, born Dec. 18, 1989, died in Nyack, New York, February 9, 2006, at the age of 16 during a seizure. Her epilepsy was caused by congenital CMV, the leading viral cause of birth defects. We buried her in Airmont, NY, with the Valentine's cards that were already mailed to her before she died.

Expecting Elizabeth, due to be born on Christmas Eve of 1989, had been an exciting experience. But the moment she arrived on the 18th, I felt a stab of fear. My immediate thought was, “Her head looks so small—so deformed. "The neonatologist said, "Your daughter has microcephaly--her brain is very small with calcium deposits throughout. If she lives, she will never roll over, sit up, or feed herself." He concluded that Elizabeth's birth defects were caused by congenital cytomegalovirus (CMV). Women who care for young children are at a higher risk for catching it because preschoolers are the majority of carriers. Pregnant women need to be careful not to kiss young children on or around the mouth or share food or towels with them.
Why hadn’t I heard of CMV before and the precautions to take? While I was pregnant with Elizabeth, I not only had a toddler of my own, but I also ran a licensed daycare center in my home. I felt sick at what my lack of knowledge had done to my little girl. In milder cases, children with congenital CMV may lose hearing or struggle with learning disabilities later in life. But Elizabeth's case was not a mild one.

When my husband Jim heard Elizabeth's grim prognosis, he stared at her and said, “She needs me”—just like Charlie Brown with that pathetic Christmas tree. It took me about a year, but I eventually stopped praying that a nuclear bomb would drop on my house so I could escape my overwhelming anguish over Elizabeth's condition. Life did become good again—but it took a lot of help from family, friends, some Valium, and the Book of Psalms. We were eventually able to move forward as a happy, "normal" family.

Sixteen years later, I awoke feeling so proud of Elizabeth. It was her 16th birthday and just one week before her 17th Christmas. When the song “I’ll be home for Christmas” played on the radio, I cried thinking how hard Elizabeth fought to be home with us, overcoming several battles with pneumonia, spinal and hip surgeries, and most recently, seizures. Weighing only 50 pounds, she looked funny to strangers as a result of her small head and adult teeth, but she was lovely to us with her long, brown hair, large blue eyes and soul-capturing smile. Although still in diapers and unable to speak or hold up her head, Elizabeth was very happy and loved going for long car rides. She especially enjoyed going to school and being surrounded by people, paying no mind to the stares of “normal” children who thought she belonged on the "Island of Misfit Toys."

At the end of the day, I got the call I had always feared. “Mrs. Saunders, Elizabeth had a seizure and she’s not breathing." The medical team did all they could, but she was gone. While holding Elizabeth’s body on his lap, my husband looked down into her partially open, lifeless eyes and cried, “No one is ever going to look at me again the way she did.” 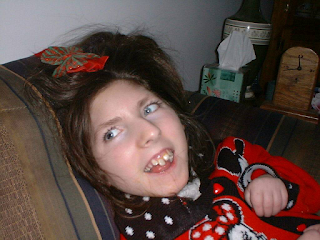 Now when we prepare to celebrate Christmas without Elizabeth, it is with some heartache that I bring out the holiday decorations. Elizabeth used to love to sit on the couch with her big, once homeless old dog Riley, and watch us decorate. (Their story is told in my memoir, "Anything But a Dog! The perfect pet for a girl with congenital CMV.") 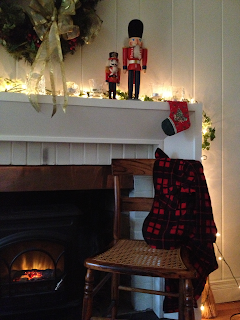 Now, I perform a new Christmas tradition. I carefully unfold the black and red checked shirt Elizabeth wore on her last day and hang it over an empty chair beside our fireplace. Although she can't be home for Christmas, I feel that she is my “Tiny Tim” who would say, if she could, “God bless us, everyone!”

Although I miss Elizabeth, I’m glad she is free from suffering, glad she is safe in her new, Heavenly home. I knew I would need reminders of where Elizabeth was and what she is enjoying, so engravers etched on the back of her headstone that she is dwelling in the house of the Lord where: "...the lame leap like a deer and the mute tongue shout for joy" (Isaiah 35:6). Many times when I was lost in despair those first few years, I visited her stone, hugged it, and left somewhat cheered when I pondered her new life. 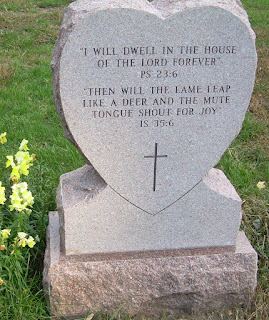 When my time comes, I will see Elizabeth again. 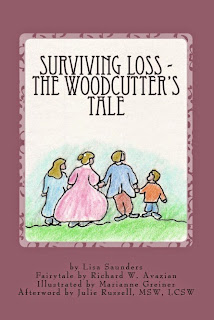 My father wrote a fairy tale that I found very helpful after Elizabeth died, The Woodcutter’s Tale. You can read it for free on my blog with comments on grieving at: https://congenitalcmv.blogspot.com/2016/03/surviving-loss-woodcutters-tale.html
The Only Thing I Can Do for Elizabeth Now

Since Elizabeth no longer needs my care, the only thing I can do for her now is to care for those not yet born—to prevent them from suffering as Elizabeth did. I do that by speaking and writing about congenital CMV prevention. When I lived in Connecticut, I was thrilled when legislators finally passed a bill requiring congenital CMV testing for infants who fail their hearing screen.

After presenting the story of Elizabeth's life at the first international Congenital CMV conference held in the U.S, at the Centers for Disease Control and Prevention (CDC) in Atlanta, GA, in 2008, scientists from all over the world approached to thank me for inspiring them to continue their work. Mothers, on the other hand, pushed their children towards me in wheelchairs and asked, “Why didn’t my doctors tell me how to prevent this?” One mother even asked, "Learning what you did, why didn't you do all you could to shout it from the rooftops?"
I moved back to New York (Baldwinsville, near Syracuse) in December 2019. Until doctors make CMV prevention a standard practice of care, I'm trying to "shout it from the rooftops" through my writing, speaking engagements, and contacting New York legislators I hope will help. Thankfully, there is a large army of CMV parents and medical professionals doing the same thing.
Posted by Lisa Saunders at 10:39 AM