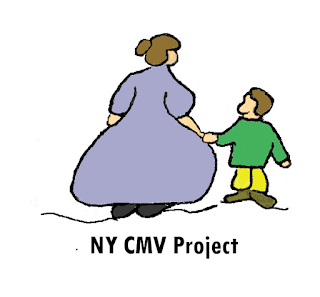 to improve prevention and early treatment of congenital cytomegalovirus

The 2018 Senate Bill S2816, www.nysenate.gov/legislation/bills/2017/s2816/amendment/original, was authored by Assemblymember Linda B. Rosenthal
In 2020, I learned that mothers and child care providers of young children in New York are still not being educated about their "occupational risk" for CMV despite OSHA's warning to caregivers, the NY Department of Health's webpage on CMV, and the availability of several free educational tools from the CDC and Cornell University
More New York babies can avoid the disabilities caused by congenital cytomegalovirus (cCMV), saving taxpayers the costs of special education, lost wages, etc., by making the following amendments to S2816:
1) Provide more specific wording to help the Health Department fulfill its mandate already in place to provide CMV prevention education, particularly for women at high risk, such as pregnant mothers who have a toddler in group care and child care providers/educators. The risk of cCMV is significantly higher than other, better-known congenital diseases such as fetal alcohol syndrome and HIV/AIDS. Prevention measures are simple and include basic hygiene practices that involve avoiding contact with saliva and urine from babies and young children. cCMV infections can only be prevented by preventing CMV infection in pregnant women.
2. Make cCMV a reportable condition in New York (https://health.ny.gov/forms/instructions/doh-389_instructions.pdf). This will enable health department personnel to track affected babies and notify their pediatricians within the 3 week window to confirm that the infection is congenital. This in turn will compel the pediatrician to refer the baby with cCMV to a Pediatric Infectious Diseases Specialist, who would pursue a workup and consider antiviral treatment to lessen the long-term consequences. Moreover, early identification of cCMV has been found to reduce the functional impairments that stem from hearing loss.
FACT SHEET

A. What is Congenital Cytomegalovirus (cCMV)?


# In the U.S., about 1 in every 200 babies is born with a cCMV infection. Of these babies, around 1 in 5 will have long-term health problems.(www.cdc.gov/cmv/index.html).

B. cCMV is largely preventable, but 91% of women do not know about the disease or prevention.

(See: https://cmv.usu.edu/Uploads/pdfs/17739_9664Scott%20D.Grosse.pdf)
The median cost of healthcare for a child with a symptomatic case of cCMV is 25.2 times higher than that of a child without cCMV over the course of the first four years.

cCMV screening and should be pursued as the next step in cCMV legislation. If cCMV is detected at birth, some babies can be treated with antiviral drugs and hearing loss, as well as other side effects, can be mitigated.

Failure to detect cCMV is common and has devastating consequences: cCMV goes largely undetected because a majority of affected babies are asymptomatic at birth. However, being symptom-free at birth does not necessarily exempt asymptomatic cCMV-positive infants from the disease's impacts later in life. Currently in New York, there is a statewide policy that infants are to be screened for cCMV if they fail their hearing screening. However, this targeted screening is insufficient. 10-25 % of babies born  with cCMV will have no symptoms at birth but will later develop hearing loss by age 18. Because hearing loss due to cCMV often worsens or develops later in childhood, a policy of targeted screening of infants who fail the newborn hearing screening fails to detect nearly half CMV cases. (www.ncbi.nlm.nih.gov/pmc/articles/PMC5260148/), (https://pediatrics.aappublications.org/content/early/2017/02/14/peds.2016-2610)

Ten Reasons Why Caregivers/Teachers Must be Educated About CMV

1) According to OSHA, CMV is a "Recognized Hazard". OSHA states that all workers have the right to “receive information and training on job hazards, including all hazardous substances in your workplace.” OSHA and CMV: "Childcare jobs may involve contact with children infected with CMV or their saliva, nasal secretions, or excrement. CMV is spread through exposure to infected body fluids. Since a person with CMV may show no symptoms, childcare workers should utilize proper handwashing and sanitization procedures. Childcare workers should also use personal protective equipment (PPE), such as gloves, to help prevent exposure to body fluids” (www.osha.gov/SLTC/cmv/hazards.html).

2) CMV is a viral infection that is common in children. Up to 70% of children ages 1-3 years in group care settings excrete CMV. The New York Health Department website states, "In daycare centers, where hand washing practices may not be as good, there may be a greater risk of infection...Pregnant women working in child care facilities should minimize direct exposure to saliva and avoid kissing babies or young children on the mouth. Hugging is fine and is not a risk factor...." Information is provided in English and Spanish at: https://www.health.ny.gov/diseases/communicable/cytomegalovirus/fact_sheet.htm

3) HOWARD A. ZUCKER, M.D., J.D ,Commissioner of Health for New York, stated: "According to the Centers for Disease Control and Prevention (CDC), female workers of reproductive age in child care centers should be educated on CMV and its potential risks, and should have access to appropriate hygiene measures to minimize occupationally-acquired infection " (August 2018).

4) American Academy of Pediatrics states: “Child care staff members should receive counseling in regard to the risks of acquiring CMV from their primary health care provider. However, it is also important for the child care center director to inform infant caregivers/teachers of the increased risk of exposure to CMV during pregnancy” (Staff Education and Policies on Cytomegalovirus (CMV), "Caring for Our Children: National Health and Safety Performance Standards; Guidelines for Early Care and Education Programs", American Academy of Pediatrics et al.).

5) Approximately 1 in 200 children are born in the U.S. with congenital CMV. The impact on the fetus may include deafness, blindness, cerebral palsy, developmental disabilities, seizures and even death (www.cdc.gov/cmv). Congenital cytomegalovirus is a more common cause of disabilities than Zika, Down syndrome and fetal alcohol syndrome. CMV is the leading viral cause of birth defects ("Cytomegalovirus Infection in Pregnancy: Should All Women Be Screened?", Carlson et al., 2010).

7) Recent surveys show that most child care providers do not know about CMV and many acknowledge using diaper wipes to clean hands instead of following proper protocols (Thackeray and Magnusson, 2016). Diaper wipes do not effectively remove CMV from hands (Stowell et al., 2014). In the U.S., “61 % of children under the age of 5 are cared for in a child care facility...Intervening with child care providers and parents through child care facilities are key opportunities to reduce prevalence of CMV infection and other diseases” (Thackeray and Magnusson, 2016).

8) Child care providers serving children receiving assistance through the Child Care and Development Fund program must receive training on topics covered by the Child Care and Development Block Grant Act of 2014. “Caregivers and teachers are required to be educated regarding Standard Precautions [developed by CDC] before beginning to work in the program and annually thereafter. For center-based care, training should comply with requirements of the Occupational Safety and Health Administration (OSHA)” (Caring for Our Children Basics).

9) Child care providers accredited by National Association for the Education of Young Children should already be familiar with the document, “NAEYC Early Childhood Program Standards and Accreditation Criteria & Guidance for Assessment,” which acknowledges the need to "reduce occupational hazards such as infectious diseases (e.g., exposure of pregnant staff to CMV…)”

10) Potential Cost of Not Warning Workers about CMV: In New South Wales, “a childcare worker and her severely disabled son were awarded $4.65 million. A Court of Appeal ruled that the child's disabilities resulted from the woman being infected with cytomegalovirus (CMV) at work (Hughes v SDN Children's services 2002)” (Queensland Government, Australia, 2017). Meridian Lawyers stated: "The allegations of negligence were that Sydney Day Nursery breached its duty of care to Linda ...by failing to warn her of the risks of CMV in circumstances where the centre knew or ought to have known of the risks of CMV to pregnant women…"

"CMV Training Module Video": https://aural.rehab.uconn.edu/cmv-training-module/
(This work was supported by the AUCD and the LEND Pediatric Audiology Program made possible through a Cooperative Agreement with the Health Resources and Services Material Child Health Bureau (MCHB) grant awarded to the University of Connecticut A.J. Pappanikou Center for Excellence in Developmental Disabilities (Grant #3T73MC30115-01-01) in consultation with Child

The above publication/presentation is by Nellie Brown, MS, CIH, Certified Industrial Hygienist, and Director, Workplace Health and Safety Program, Worker Institute, Cornell University – ILR School. The information in this training program was originally developed for The Center for Occupational & Environmental Medicine at the Erie County Medical Center (ECMC), 462 Grider St., Buffalo, NY 14215.  Permission to make this training program available online granted by The Center for Occupational & Environmental Medicine. For further information, or to ask about a Q and A over Zoom, contact Nellie Brown at: njb7@cornell.edu.

Posted by Lisa Saunders at 8:50 AM

Happiness is all i see now big thanks to Dr. Ubarlo from West Africa (NIGERIA), I never thought that I will live on earth before the year runs out. I have been suffering from a deadly disease herpes Virus for the past 2 years now; I had spent a lot of money going from one place to another, hospitals have been my home every day. Constant checks have been my hobby not until this blessed day, I was searching through the Internet, I saw a testimony on how Dr. Ubarlo. from West Africa (NIGERIA) helped someone in curing his herpes Virus . quickly I copied his Whatsapp Contact: +2348119508814 just to give him a test I spoke to him, he asked me to do some certain things which I did,he told me that he is going to provide the herbal cure to me, which he did, then he asked me to go for medical checkup after some days after using the herbal medication, I was free from the deadly disease, he only asked me to post the testimony through the whole world, faithfully am doing it now, please brothers and sisters, he is great, I owe him in return. if you are having a similar problem just contact him by Email: at drubarlohome@gmail.com whatsapp him on +2348119508814 HIS HAVE THE CURE TO THIS FOLLOWING DEADLY DISEASE [1] Ischemic heart disease [2] Cerebrovascular disease [3] Lower respiratory infections [4] Chronic obstructive pulmonary disease [5] Diarrhea diseases [6] Trachea, bronchus, lung cancers [7] Tuberculosis [8] Diabetes mellifluous [9] Hypertension heart disease [10] HIV/AIDS