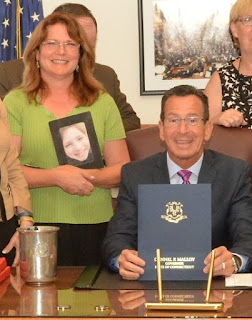 Can you help prevent the leaving viral cause of birth defects, congenital cytomegalovirus (CMV), by posting information on how a woman of childbearing age can protect their unborn children from this common yet little known disease that causes more birth defects than Down syndrome?


About 1 in 150 children is born with congenital CMV infection, and about 20% percent of those are permanently disabled by it.

Q. Which women are most at risk for contracting CMV?


A. “75% of women with a primary infection during pregnancy acquire CMV from their own child under two years of age,” said Stuart Adler, M.D.

Q. What is being done about this? In 2013, Utah passed a law requiring congenital CMV prevention education in places such as daycare centers and the testing of newborns for CMV if they fail their hearing screen. Last May, Connecticut's Governor Malloy signed a bill requiring newborns who fail a hearing test to be screened for congenital cytomegalovirus. (See photograph of Governor Malloy at the ceremonial bill signing--I'm holding a picture of my deceased daughter, Elizabeth). From a press release issued June 4, 2015, by the State Senate Democrats of the Connecticut General Assembly: "With bipartisan support, the legislature approved and the governor signed a bill that will help mitigate the devastating impact that this disease has on families. The bill requires that hospitals and other health care institutions test newborn infants for CMV if they fail a newborn hearing test. This will help parents intervene early and get their newborn child the help it needs."

Q. How many people know about congenital CMV?

Q. Why haven’t most people heard of this leading cause of birth defects before?


A. Doctors don’t realize how prevalent it is. Fewer than half (44%) of OB/GYNs surveyed reported counseling their patients about preventing CMV infection. “The virtual absence of a prevention message has been due, in part, to the low profile of congenital CMV. Infection is usually asymptomatic in both mother and infant, and when symptoms do occur, they are non-specific, so most CMV infections go undiagnosed,” according to “Washing our hands of the congenital cytomegalovirus disease epidemic.”


Q. Is this the “kitty litter” disease?


A. No, that is toxoplasmosis, which causes fewer birth defects than cCMV. Like toxoplasmosis, cCMV is preventable, but most women of childbearing age have never heard of the precautions to take.


Congenital CMV is the most common cause of nonhereditary sensorineural hearing loss in childhood. In addition to deafness, Congenital Cytomegalovirus (cCMV) causes mental retardation, liver disease, and cerebral palsy as a result of infection in pregnant women‎. According to the CDC, in the U.S.:


·         Every hour, congenital CMV causes one child to become disabled.


My OB/GYNs didn’t tell me how to prevent congenital CMV, namely by avoiding kissing my toddler near the mouth or sharing food with her, until after my second daughter was born profoundly mentally and physically disabled by the disease. It was then that I received literature stating women who work in daycare, or have a young child in daycare, are at a higher risk for catching it as toddlers are the majority of carriers. While I was pregnant with Elizabeth, I not only had a toddler of my own, I was also running a licensed daycare center in my home. Nowhere in the licensing literature was there a CMV prevention message. In milder cases, children may lose hearing or struggle with learning, but Elizabeth's case was not a mild one. Elizabeth died at age 16 during a seizure in 2006.


“We must commit to educating the public about cytomegalovirus so that we can potentially prevent the devastating consequences of this disease on our children," said Brenda K. Balch, MD, Connecticut's American Academy of Pediatrics Early Hearing Detection and Intervention Chapter Champion.


Q. Will it make a difference if women are educated on CMV prevention?


A. Yes, according to studies in the U.S. and France. Dr. Demmler-Harrison, Director, Congenital CMV Disease Research, Clinic & Registry, states: “Studies have shown that women who know they are CMV seronegative, know they are pregnant, and know about their toddler's CMV shedding are the most likely to prevent CMV transmission and reduce their risk from over 50 percent during pregnancy to a risk of less than 5 percent during pregnancy. "


"For seronegative pregnant women who are at high risk because of exposure to a young child in the home or in large group childcare, hygienic precautions are simple, inexpensive, and highly effective," said Stuart Adler, M.D., Professor Emeritus of Pediatrics and Professor of Microbiology and Immunology, Virginia Commonwealth University. (See his article, "Prevention of Maternal-Fetal Transmission of Cytomegalovirus.")


The United States Senate had passed legislation designating the month of June as "National Congenital CMV Awareness Month," while recommending that “more effort be taken to counsel women of childbearing age of the effect this virus can have on their children.” (This occurred through the efforts of Stop CMV.)


There is no vaccine yet to prevent human cytomegalovirus (HCMV). One reason for the delay in successful development of a vaccine is “there has been insufficient education about the problem of HCMV infection…” Pharmaceutical companies need to know that a vaccine will be used because people know about the disease.


Click here for the CDC's flyer: What Women Should Know About Cytomegalovirus (CMV)


Thank you in advance for your help.


Lisa Saunders
Parent representative, Congenital CMV Foundation, and author of memoir, "Anything But a Dog! The perfect pet for a girl with congenital CMV (cytomegalovirus)"


PO Box 389, Mystic, CT 06355, Lisasaunders42@gmail.com
You can access my presentation to Connecticut's Medical Assistance Program Oversight Council's Women’s Health Committee to explain cCMV and the required testing by clicking on my  PowerPoint uploaded to Google drive.