Fairy Tale inspired by the death of Elizabeth Saunders 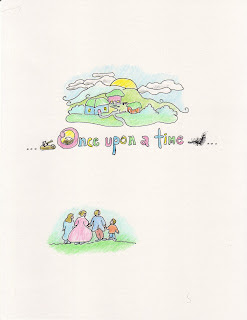 THE WOODCUTTER’S TALE
by Richard W. Avazian (Elizabeth's grandfather wrote this after her death)Illustrated by Elizabeth's aunt, Marianne Greiner . Elizabeth died as a result of congenital CMV complications.

Once upon a time long, long ago in a far-away land lived Patrius, a woodcutter, and his wife Matilda. They had a 19-year-old daughter, Filia and a ten-year-old son Stefan.

It came to pass that the countryside was ravaged by sickness accompanied by high fever that caused many to perish. Stefan was stricken and shortly became very ill. The woodcutter summoned the old midwife, a gray-haired woman who also served as a doctor. “Patrius, Matilda, I am sorry to tell you that Stefan is beyond my help and must soon die.”

Struck speechless by this pronouncement, they heard the neighing and hoof beats of horses outside their cottage. Patrius went out to discover that the Princess in her royal coach had stopped. “I was returning to my castle when I heard your son was sick. Bring me to him.” Patrius led the Princess inside and she beheld the dying Stefan. “Let me take him home with me and I will heal him. However, I will keep him with me as I have no sons after four years of marriage.” Although it broke their hearts, Patrius and Matilda agreed for they knew it was best for Stefan.

Three days after Stefan’s departure, a white dove appeared and made a nest in their thatched roof. Strangely, the family felt comforted by the presence of the dove that never left their roof. Patrius always looked for it when he returned from his wood-cutting forays into the forest. Matilda and Filia often looked up when they were doing their outdoor chores to see if the dove was still there and to experience the sense of consolation and protection, which seemed to emanate from the dove.

After a few years, Filia married a cooper and moved to a village about ten miles distant.

Though they missed their daughter greatly, the couple now had the dove for company.

Finally, stricken with years, the old couple became weaker and weaker and sensed that they both were going to die. Patrius said, “Let us go outside, bring our bench and sit on it, hold hands and look at our dove.” Matilda agreed and they brought their bench outside. They settled themselves on the bench and faced their cottage, but were surprised to see that the dove was no longer on the roof. Finally growing too feeble to move, they heard the sound of horses’ hooves.

With their last breaths, they beheld the royal coach approaching. As the coach drew near, they saw a smiling Stefan inside, dressed in shining white garments and looking every inch a Prince. “Come home with me,” said Stefan. Overjoyed and amazed that they suddenly no longer felt feeble, the couple stepped into the coach. As the coach started to pull away, Patrius and Matilda looked back to see if their dove had returned. But the dove, no longer being needed, was gone.

This disappointment was replaced by their boundless joy at seeing how happy Stefan had been and by knowing they would be with Stefan forever in their new home.
For single page with illustrations, open Woodcutter with sketches edits less photos.doc
Posted by Lisa Saunders at 4:18 AM