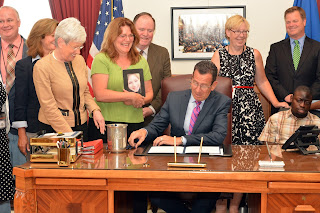 Mystic, Conn.— Governor Dannel P. Malloy invited families of children disabled by congenital cytomegalovirus (CMV), and doctors who work with CMV, to a ceremonial bill signing for Public Act No. 15-10: "An Act Concerning Cytomegalovirus" at the Office of the Governor in Hartford on July 28.(See: https://www.cga.ct.gov/2015/ACT/PA/2015PA-00010-R00HB-05525-PA.htm)

"With bipartisan support, the legislature approved and the governor signed a bill that will help mitigate the devastating impact that this disease has on families. The bill requires that hospitals and other health care institutions test newborn infants for CMV if they fail a newborn hearing test. This will help parents intervene early and get their newborn child the help it needs," stated the State Senate Democrats of the Connecticut General Assembly in a press release.

"This is a game-changing step forward in our ability to determine CMV causality and give parents a viable option for early treatment," said Scott R. Schoem, MD, FAAP, Director of Otolaryngology, Connecticut Children’s Medical Center.

Congenital CMV is the most common cause of nonhereditary sensorineural hearing loss in childhood. In addition to deafness, Congenital Cytomegalovirus (cCMV) causes mental retardation, liver disease, and cerebral palsy as a result of infection in pregnant women‎.

Melvette Ruffin of Stamford brought her 26-year old son, Jarred, in his wheelchair to the ceremonial signing on July 28. When Jarred was born severely disabled by congenital CMV in 1989, Melvette had never heard of the virus or how she could have prevented it. “Meeting Governor Malloy, and hearing him talk about putting the CMV law into motion, was a real thrill moment for me. Having a child with multiple disabilities is hard. For twenty six years, I felt alone watching my child suffer from this disease and I didn’t know how to prevent this from happening to other families. But being at this signing with mother Lisa Saunders, whose daughter was also born severely disabled by CMV in 1989, and meeting Dr. Brenda Balch and law makers who really care, made me feel change is finally coming. Hearing the governor call it ‘Lizzie’s Bill’ in memory of Lisa’s daughter made this all so personal.”

According to the CDC, in the U.S.:

Ever since Lisa Saunders of Mystic, the parent representative of the Congenital Cytomegalovirus Foundation, and other parents with children disabled by the virus, learned the State of Utah passed a CMV bill in 2013, they, along with several in the medical community, have been trying to get the State of Connecticut to follow suit. They spent the 2014 and 2015 legislative sessions educating the Connecticut House and Senate about this leading viral cause of birth defects, which causes more disabilities than Down syndrome.

“We must commit to educating the public about cytomegalovirus so that we can potentially prevent the devastating consequences of this disease on our children," said Brenda K. Balch, MD, American Academy of Pediatrics Early Hearing Detection & Intervention Chapter Champion.

Saunders said, “My OB/GYNs didn’t tell me how to prevent congenital CMV until after my daughter was born. Then I received literature stating women who work in daycare, or have a young child in daycare, are at a higher risk for catching it as toddlers are the majority of carriers. While I was pregnant with Elizabeth, I had a toddler plus ran a licensed daycare center. Nowhere in the licensing literature was there a CMV prevention message. In milder cases, children may lose hearing or struggle with learning, but Elizabeth's case was not a mild one.” Elizabeth was severely mentally and physically disabled, and died at age 16 during a seizure in 2006. Saunders wrote what it was like raising Elizabeth alongside her tomboy sister and a series of dysfunctional pets in her light-hearted memoir, Anything But a Dog! The perfect pet for a girl with congenital CMV (cytomegalovirus).

Casey Famigletti of New Canaan, whose daughter was also born with congenital CMV, stated in her public hearing testimony to the Public Health Committee on Feb. 20, 2015: "What has been most frustrating to me is the fact that I was informed about not eating soft cheeses and deli meat (to prevent listeria), to not clean kitty litter boxes (to prevent toxoplasmosis), to avoid alcohol (to prevent fetal alcohol syndrome) and to take an adequate amount of folic acid (to prevent spinal bifida). If, according to the CDC, 1 in 150 children is born with congenital CMV, making it more prevalent than everything else I was informed of, why was I not informed on the simple step to reduce my risk of acquiring and passing along such a prevalent, preventable and destructive virus?"

When CMV bill supporters in Connecticut and across the country learned Governor Malloy signed House Bill 5525: "An Act Concerning Cytomegalovirus” on May 26, they were ecstatic.

“I am so excited that another state is bringing attention to congenital cytomegalovirus.  Utah is looking forward to partnering with Connecticut in their upcoming endeavors," said Stephanie Browning McVicar, Au.D., CCC-A, Utah Department of Health, Director, Early Hearing Detection and Intervention / Cytomegalovirus Public Health Initiative. In addition to testing newborns for CMV if they fail their hearing screen, Utah’s H.B 81 requires CMV prevention brochures for doctors, parents, and daycare providers.

To learn more about congenital cytomegalovirus and how to prevent it, visit the Centers for Disease Control and Prevention at: http://www.cdc.gov/cmv/index.html 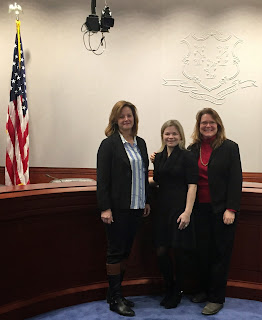 From left to right:
Brenda K. Balch, MD, Connecticut American Academy of Pediatrics Early Hearing Detection & Intervention Chapter Champion. She has a strong interest because congenital CMV is a major cause of hearing loss. Dr. Balch lives in Mystic, CT. (Sent Testimony to CT’s HB 5525.)
Casey Famigletti, CMV mom living in New Canaan, CT. (Sent Testimony to CT's HB5525.)
Lisa Saunders of Mystic, Connecticut, is author of memoir, "Anything But a Dog! The perfect pet for a girl with congenital CMV (cytomegalovirus)," and the parent representative of the Congenital Cytomegalovirus Foundation, which raises awareness about maternal testing for first infection during pregnancy, newborn testing and the need to develop a vaccine. LenorePereira, Ph.D., Professor, Cell and Tissue Biology Department, University of California San Francisco, is the Foundation founder. (Lisa Sent Testimony to CT's HB5525.)
Watch Rep. Bumgardner urges support for cytomegalovirus screening

Posted by Lisa Saunders at 2:35 PM