Health Insurance Can Save Money By Teaching CMV Prevention 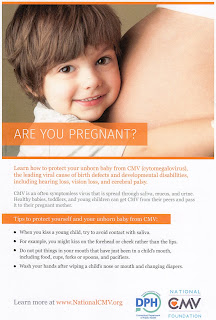 Does your health insurance company work to prevent the leading viral cause of birth defects, congenital cytomegalovirus (CMV)?

According to the New York Times in 2016, CMV Is a Greater Threat to Infants Than Zika, but Far Less Often Discussed.

I am the parent representative of the Congenital Cytomegalovirus Foundation and advocate for providing women of childbearing age information about congenital cytomegalovirus (CMV), which causes more birth defects than fetal alcohol syndrome and has been referred to as America's Zika.

I am able to speak on CMV prevention to your organization or provide additional information for anyone on your staff who would normally teach birth defect prevention.

“Despite being the leading cause of mental retardation and disability in children, there are currently no national public awareness campaigns to educate expecting mothers about congenital CMV,” states Clinical Advisor article, “Educate pregnant women to prevent congenital CMV” (2014).

Of the four million infants born each year in the U.S., approximately 1% are infected prenatally with CMV (American Academy of Pediatrics et al., Caring for Our Children, 2011).  Ten percent of those infants (about 4,000) may have one or multiple abnormalities.

CMV is often found in the bodily fluids of otherwise healthy toddlers. Toddlers can spread the disease to other toddlers by mouthing each other’s toys, and to their adult caregivers who may be unaware of how to properly handle bodily fluids such as saliva and nasal secretions. Unfortunately, most women of childbearing age don’t know about CMV, and don’t realize they should avoid kissing toddlers around the mouth or share cups and utensils with them.

Although CMV did no harm to the toddlers in my in-home licensed childcare center, my daughter  Elizabeth was born severely disabled by congenital CMV. After her birth, I was then given information from the Centers for Disease Control and Prevention (CDC) stating, "People who care for or work closely with young children may be at greater risk of CMV infection than other people because CMV infection is common among young children..." This information came too late to spare Elizabeth. Nowhere in my daycare licensing training was CMV mentioned. CMV prevention was not discussed in my prenatal doctor visits.

I worked to get a CMV testing bill passed in 2015.  Although prevention education didn't pass because of funds, the Connecticut Department of Public Health now provides the following information and flyers:

According to my calculations, providing prevention education could annually save several million dollars in the State of Connecticut alone.  Children disabled by congenital CMV are estimated to cost the U.S. healthcare system, $1.86 billion annually at $300,000/year each. (Modlin et al., 2004).

CMV prevention education works according to several studies. The New York Times stated, “pregnant mothers shown a video and offered hygiene tips were much less likely to get CMV (5.9 percent) than those not given information on prevention (41.7 percent)” (Saint Louis, 2016). Five CMV prevention education studies published between 1993 and 2015 were analyzed in the article, Prevention of Maternal–Fetal Transmission of Cytomegalovirus: “In each report, the efficacy of hygienic precautions has been [greater than] 75%” (Adler, 2015).

This one-page fact sheet I created for policy makers provides more information: https://drive.google.com/file/d/0B9Klfxar2CmjU1ZLRUc2VlFNbEE/view or you may wish to click into my list of 15 reasons why childcare givers need to know about CMV.

Please let me know if I can meet with you to discuss ways we can prevent the suffering caused by congenital CMV.