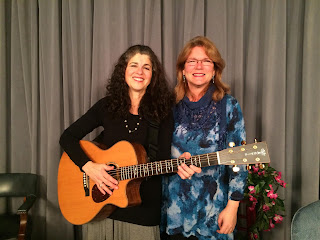 Mystic, Conn: Debra Lynn Alt released a new song,  "Had I Known (about CMV)", in June to help stop the leading viral cause of birth defects, congenital cytomegalovirus (CMV).  June is National Cytomegalovirus Awareness Month. The U.S. Senate states that "more effort be taken to counsel women of childbearing age of the effect this virus can have on their children."
Alt has contributed other songs for causes and now wants to call attention to this little-known, preventable disease, inspired by the death of her friend’s daughter, Elizabeth Saunders. She composed "Had I Known (about CMV)"  to help convey how a mother feels when she learns her newborn's disabilities might have been prevented had she known about CMV. The story got the attention of  reporter Sarah Cody atWTNH News 8  who wanted to help expound upon the power of a song to bring attention to congenital CMV.
After learning about CMV from Lisa Saunders who contracted the disease while pregnant with Elizabeth, Alt partnered with Saunders with the song to help build a well-needed platform of attention to this virus that causes more disabilities than Zika and fetal alcohol syndrome. The March of Dimes states: “As much as 70% of children between 1 and 3 of age who go to day care may have CMV. They can pass it on to their families, caretakers and other children.”
Congenital CMV can cause premature birth, hearing and vision loss, small head size, lack of coordination, seizures and death. According to the CDC, "Pregnant women may be able to lessen, but not eliminate, their risk of getting CMV by reducing contact with saliva and urine from babies and young children. Some ways to do this are: kissing children on the cheek or head rather than the lips, and washing hands after changing diapers."
Mothers of toddlers in group care and child care providers are at increased risk for CMV. Saunders was a licensed child care provider unaware of her occupational risk for CMV. She also hadn’t heard of the precautions she should have taken around her own toddler. To try to prevent that from happening to other child care providers, Saunders launched the “ChildCare Providers Fighting CMV Project" to offer the free online, family-friendly CMV prevention tool kit, “Share a Meal, Not the Germs,” that includes her CMV-fighting, "color-me-in" fairy tale, "Once Upon a Placemat: A Table Setting Tale."  The story teaches germ prevention by featuring Miss Cup's distress when people share her without giving her a bath first and teaches table-setting, which includes hand-washing first, by featuring Mr. Knife's fear of the dish running away with the spoon, which is why Mr. Knife is placed between the plate and the spoon with his teeth facing the plate.
Brenda K. Balch, MD, Connecticut's American Academy of Pediatrics Early Hearing Detection and Intervention Chapter Champion, also collaborates with Saunders on CMV prevention. She says, "We must commit to educating the public about cytomegalovirus so that we can potentially prevent the devastating consequences of this disease on our children." Along with Saunders, Balch was instrumental in getting the 2016 CMV law passed in Connecticut that requires newborns be tested for CMV if they fail their hearing test.

Approximately 8 - 20% of child care providers contract CMV infection every year (AAP et al., 2011) VERSUS 1-4% in general population (CDC).  The American Academy of Pediatrics (AAP), states: "With current knowledge on the risk of CMV infection in child care staff members and the potential consequences of gestational CMV infection, child care staff members should receive counseling in regard to the risks of acquiring CMV from their primary health care provider. However, it is also important for the child care center director to inform infant caregivers/teachers of the increased risk of exposure to CMV during pregnancy."
CMV can be transmitted via contact with bodily fluids such as urine, saliva and mucus. To save time after changing diapers, many childcare providers use diaper wipes to remove bodily fluids from hands and surfaces, but diaper wipes do not kill CMV.  In a 2016 survey, only 18.5% of licensed “in-home” daycare providers have heard of CMV  (Thackeray et al., 2016). A 2018 University of Connecticut nationwide survey confirmed that child care providers are still largely unaware of congenital CMV (cCMV): "Consistent with previous research, child care providers do not have knowledge regarding CMV or cCMV" (DeWald et al., 2018).
The recording of this song, with Debra Lynn Alt as lead vocalist, includes keyboard and harmony vocals (Connie Howard), mandolin and guitar (Jim Carpenter), violin (Stacy Phillips), cello (Ann West), and bass (Jeff Fuller). It can be heard at this link: https://drive.google.com/file/d/0B9Klfxar2CmjRGN0cnBNQXRDdExMQWJOVHVZRGR1aWFJX0lJ/view?usp=sharing (recorded at Loco Dare Productions, Niantic, Connecticut).
News 8 reporter, Sarah Cody, created an additional CMV prevention video on her Facebook link here:  https://www.facebook.com/sarah.cody.10/videos/1421707187974926/
Only a handful of states, such as Utah and Idaho, have CMV awareness protocols to inform and protect their child care workers from CMV. Concerned citizens can learn if their state is doing anything to prevent birth defects from congenital CMV at: https://www.nationalcmv.org/cmv-research/legislation.aspx.    To locate your state's child care licensing departments to learn of they are following the recommendations made by the AAP, which can be found at: http://cfoc.nrckids.org/CFOC/Database/7.7.1.1,  visit: childcareaware.org/providers.

###
About Lisa Saunders, Founder, “ChildCare Providers Fighting CMV”
Lisa Saunders, a former licensed childcare provider and graduate of Cornell University, was instrumental in helping Connecticut pass a CMV testing law in 2015. She is the parent representative of the Congenital Cytomegalovirus Foundation, an award-winning writer, and SEC-TV talk show host living in Mystic, Connecticut, with her husband, Jim. She is the content coordinator for the magazine, Groton-Mystic Neighbors, author of 10 books, and a part-time history interpreter at Mystic Seaport.  Lisa writes extensively about congenital CMV in her books and through articles such as "The Danger of Spreading CMV: How We Can Protect Our Children" (ChildCare Aware of America, 2017) and “Help Childcare Providers Fight CMV” (National CMV Foundation, 2018). Visit her at www.AuthorLisaSaunders.com.


About Debra Lynn Alt, Singer/Songwriter
Debra’s career began in New York City in the late 1970’s as the lead singer for the Rolling Stone Magazine houseband. Since then she has performed in a variety of venues on the East Coast, in bands and accompanying herself on keyboard and guitar. Her third CD of mostly original songs was produced in Nashville, TN as part of a compilation of award winning photography, illustrated by the lyrics of her song inspired by cancer survivors. Each Moment We’re Alive was sung at a Hay House Publishing Conference at the bequest of Dr. Wayne Dyer, followed by his glowing endorsement on the cover of her book. The song and book has led to cancer support workshops, organizations and events facilitating survivor support and coaching. Debra has been commissioned to write songs, and continues to contribute her music and performances at events to enhance fundraising and awareness for child abuse, Habitat for Humanity, Mothers Against Drunk Driving, autism, and most recently CMV Awareness. A recipient of community service awards, her work has been featured on TV and radio interviews, podcasts, and at hospice, community centers, benefits and musical theater. A resident of North Branford CT, Debra is currently working on a show and memoir entitled “Something to Sing About”, in tandem with her ongoing studies and interest in how giving voice to personal challenges can embody and enhance a wide spectrum of healing realms. To contact or learn more about Debra visit her at debrasong.com.

Posted by Lisa Saunders at 4:33 AM