(Photo caption): Lisa Saunders was a licensed day care provider in 1989 when she gave birth to daughter Elizabeth born with microcephaly, a serious birth defect that resulted from Saunders contracting cytomegalovirus (CMV) while pregnant.

Mystic, Conn.—Licensed day care provider Lisa Saunders was not informed that caring for young children put her pregnancy at risk. In fact, most day care workers are largely unaware of cytomegalovirus (CMV), the leading viral cause of birth defects—much more widespread than Zika.

In 2015, Saunders, parent representative of the Congenital Cytomegalovirus Foundation, was instrumental in the passage of the Connecticut CMV bill mentioned in the New York Times article, "CMV Is a Greater Threat to Infants Than Zika, but Far Less Often Discussed" (Oct. 25, 2016).  Saunders's book, Anything But a Dog! The perfect pet for a girl with CMV (cytomegalovirus), is seen behind Dr. Gail Demmler-Harrison in the live interview embedded in the New York Times article).

In 1987, Saunders became a licensed in-home day care provider in Maryland. She said, “Nowhere in the licensing literature was there a mention of CMV and the extra precautions I should take. In 1989, my second daughter, Elizabeth, was born with microcephaly, a small, severely damaged brain, caused by congenital CMV. It was then that I received information from the hospital stating day care providers were at increased risk for contracting the disease because toddlers are often shedding it through their bodily fluids.” Elizabeth died 16 years later during a seizure in 2006.

15 Reasons Why Caregivers/Teachers Should Know About CMV

1. Congenital CMV is the #1 Birth Defects Virus (Carlson et al., 2010). "More children will have disabilities due to congenital CMV than other well-known infections and syndromes, including Down Syndrome, Fetal Alcohol Syndrome, Spina Bifida, and Pediatric HIV/AIDS" (NationalCMV.org).
2. 1% of live born infants are infected prenatally with CMV (American Academy of Pediatrics [AAP] et al., Caring for Our Children, 2011).
3.“Women who are exposed to CMV prior to conception or within the first trimester of pregnancy and seroconvert have increased risk of their infant being infected with CMV.”(Thackeray et al., 2016).
4. CMV is an “occupational risk" for daycare educators (Joseph, et al., 2006). Caregivers/teachers should be told about CMV because of increased probability of exposure (AAP et al.. 2011).
5.General public: 1-4% is the estimated “annual rate of a pregnant woman who is CMV antibody negative catching CMV for the first time in pregnancy” Demmler-Harrison, MD, CMV In Pregnancy: What Should I Know?, 2014).
6.Caregivers/teachers: 8- 20% of them contract CMV infection every year (AAP et al.. 2011).
7.44% to 100% of two-year-olds in group daycare are excreting CMV (Pass et al., 1986).
8.Only 18.5% of licensed “in-home” daycare providers have heard of CMV according to “Child Care Provider Awareness and Prevention of Cytomegalovirus and Other Infectious Diseases” (Thackeray et al., 2016).
9. NAEYC: National Association for the Education of Young Children and its "Early Childhood Program Standards and Accreditation Criteria & Guidance for Assessment (10.D.01, p.91)" includes: "a. steps to reduce occupational hazards such as infectious diseases (e.g., exposure of pregnant staff to CMV [cytomegalovirus], chicken pox)..."
10.It is a worker's right to know occupational hazards according to the Occupational Safety and Health Administration (OSHA). There are more than half a million child care workers (573,430) in the U.S. according to the Child Care in America: 2016 State Fact Sheet report (pdf) published by Child Care Aware of America.
11.“Providers do not know how to appropriately sanitize surfaces to reduce spread of disease.” Many providers use diaper wipes to clean a surface. Diaper wipes do not sanitize (Thackeray et al., 2016).
12.“Increasing risk perception is important because providers may not be concerned about taking measures to reduce the probability of infection if they feel that they are at low risk” (Thackeray et al., 2016).
13.Mothers of children in daycare are also at increased risk for CMV (Pass et al., 1986). “61 % of children under the age of 5 are cared for in a child care facility...Intervening with child care providers and parents through child care facilities are key opportunities to reduce prevalence of CMV infection and other diseases.” (Thackeray et al., 2016).
14.$1.86 billion annually, with a cost per child of more than $300,000, is the estimated cost of congenital CMV to the US health  care system (Modlin, Arvin, et al., 2004).
15.The CDC "suggests that pregnant women reduce their risk of CMV acquisition during pregnancy using simple hygienic precautions but this suggestion is not often followed...the efficacy of hygienic precautions has been [greater than] 75%.” (Adler, 2015).  “Perhaps no single cause of birth defects and developmental disabilities in the United States currently provides greater opportunity for improved outcomes in more children than congenital CMV…women deserve to be informed about how they can reduce their risk of CMV infection during pregnancy…” (Cannon et al., 2005).


Shortly after moving to Connecticut in 2010, Saunders received a call from a local grandmother who said her grandson was just born disabled by congenital CMV. Saunders said, “The baby's mother had been a college student interning at a Connecticut day care center while pregnant. She, too, had not been educated about CMV and how to protect her pregnancy. When I visited the mother and baby in the hospital, the attending nurse asked me why more wasn’t being done to raise awareness of this leading viral cause of birth defects."

Saunders understands that CMV is not a pleasant topic, "but child care providers like myself are upset when they don't learn about their increased risk for CMV and need to practice meticulous hand-hygiene until after their babies are born disabled by congenital CMV."

“Pregnant childcare employees should be informed about CMV, assess their risk by serologic testing or avoid if possible caring for children less than 2 years age for the duration of pregnancy," states Stuart P. Adler M.D. of the CMV Research Foundation Inc. in his article, "Prevention of Maternal–Fetal Transmission of Cytomegalovirus."

Daycare.com provides helpful CMV prevention tips and advice for daycare workers at: https://www.daycare.com/fastfacts/illness/cytomegalovirus.html and here is another article geared to daycare providers: http://www.southingtonearlychildhood.org/cmv-risks/

Saunders also wrote "Have a Toddler or Care for One?" which people can share plus her outline and talking points for a presentation on CMV.
The following is a funny video staring, "Rhonda Rhinovirus," a germ who loves to tell stories about how they like to travel. It includes information on CMV (in the herpesvirus family, like chicken pox). It was produced by the worldwide LDS church as a result of Utah's request to educate on on CMV prevention. It's very entertaining! Watch: https://www.lds.org/callings/church-safety-and-health/training-and-video-resources/communicable-diseases?lang=eng

5.Connecticut Department of Public Health posts on its website: CDC Recommendations for People Who Care for Infants and Children

9.For students and families: Free CMV Teaching Tool Kit: "Once Upon a Placemat: A Table Setting Tale" by Lisa Saunders—Educational coloring book and fairytale emphasizes hand-washing and refraining from sharing cups/utensils.

Lisa Saunders is the parent representative of the Congenital Cytomegalovirus Foundation, which raises awareness about maternal testing for first infection during pregnancy, newborn testing, and the need to develop a vaccine. Saunders and her work to get Connecticut to pass a CMV bill was featured in Cornell’s Alumni Magazine (Sept/Oct 2015) and was widely covered in the media (News 8 at CT Capitol RE: CMV). She is the author of the memoir, Anything But a Dog! The perfect pet for a girl with CMV (cytomegalovirus), which is also being released in Japan in December 2016. A short story about her daughter Elizabeth's life with congenital CMV is told through images and music on this three-minute video. To educate entire families in a fun and memorable way, Saunders recently published the short booklet,  “Once Upon a Placemat: A Table Setting Tale,” which includes CMV prevention tips such as refraining from sharing dishes plus a free teaching tool kit with downloadable placemats for coloring and a video. Visit Lisa at www.authorlisasaunders.com 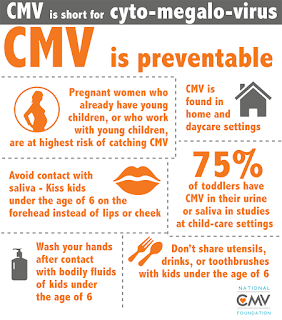 NOTE FROM LISA SAUNDERS:
Although the U.S. Senate passed legislation in 2014 recommending that “more effort be taken to counsel women of childbearing age of the effect this virus can have on their children” because "The incidence of children born with congenital cytomegalovirus can be greatly reduced with public education and awareness," and designated the month of June as "National Congenital CMV Awareness Month," in 2015, the American College of Obstetricians and Gynecologists (ACOG) has reversed it's decision to instruct their pregnant patients on what it takes to prevent CMV transmission (you can read about that in the NY Times article).  ACOG's new position on CMV instruction, recently revised in 2015, is that patients will think such guidelines difficult to implement because  "they often are considered impractical or burdensome." (see page 1514 of the ACOG Practice Bulletin (June 2015), [151 Cytomegalovirus, Parvovirus B19, Varicella Zoster, and Toxoplasmosis in Pregnancy (June 2015])

When I contacted the CDC in July 2016 to ask why they took down CMV prevention tips such as pregnant mothers refraining from kissing their toddlers around the mouth or sharing utensils with them, I received a response in August 2016 stating, "The prevention recommendations currently on the CDC website are consistent with 2015 guidelines from the American College of Obstetricians and Gynecologists (ACOG) and the American Academy of Pediatrics."

Posted by Lisa Saunders at 7:49 AM