Japan Publishes CT Mom's Book on Congenital CMV (cytomegalovirus), "Anything But a Dog! The perfect pet for a girl with congenital CMV" 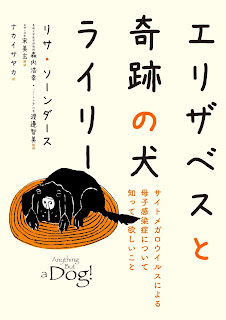 
2016 (book released in 2017): Mystic, Conn.--Sayaka Nakai, an English - Japanese book translator with Thousand Books Project Team of Tokyo, worked with author Lisa Saunders  of Mystic, Connecticut, to translate her memoir, “Anything But a Dog! The perfect pet for a girl with congenital CMV (cytomegalovirus),” into a Japanese print edition to raise awareness of the leading worldwide viral cause of birth defects. The Japanese title is "Elizabeth and the Miracle Dog Riley" and is published by Thousands of Books of Tokyo (http://shop.thousandsofbooks.jp)

“Anything But a Dog!” (published 2008, Unlimited Publishing LLC) is about Saunders's disabled daughter, Elizabeth (1989 – 2006), who grew up beside an older, tomboy sister and a series of dysfunctional pets that finally included a formerly homeless dog that kept Elizabeth company on her couch. In 2015, Saunders was instrumental in getting Connecticut to pass a law to combat the disease.

Tomomi Watanabe, a founder of TORCH Association Japan, http://toxo-cmv.org/, (TORCH: Toxoplasmosis, Other infections, Rubella, Cytomegalovirus, and Herpes simplex virus, which can cause serious conditions in the fetus or newborn following asymptomatic or mild maternal infection), was given the book by Dr. Naoki Inoue after he met Saunders at the Centers for Disease Control and Prevention (CDC) in Atlanta, GA, in 2008 during an international congenital CMV conference.

Watanabe said, "I wanted to get 'Anything but a dog'  published in Japan so more Japanese people would know about children with congenital infections and their families. Although we live far away across the Pacific, I believe we Japanese mothers feel the same way as American mothers do. We are like-minded in our mission, love our children, and regret that our lack of knowledge about CMV led to the disabilities of our children. Now, we wish to save unborn lives and help children with congenital infections and their families because helping others is one way to overcome our sad experiences.  I believe Lisa’s book will make people agree that we have to do something for future children to protect them from congenital CMV."
Japanese writer Akiko Hosokawa interviewed Lisa Saunders to publicize the need for raising cytomegalovirus awareness and funds to translate and publish “Anything But a Dog!” She asked Saunders questions such as, “Do you know how you caught CMV while pregnant?”; “Did you know about CMV during your pregnancy?”; “Is CMV well-known in the U.S.?”; and “What would you like to say to Japanese people about CMV?” In addition to The Tokyo Shinbun, other Japanese newspapers covering the book project included Hokkaido Shinbun and Kyodo News.
Translator Sayaka Nakai said popular and well-known OB-GYNs, pediatricians, and experts in infectious diseases helped raised funds to publish the book, expected to be released January 2017. Nakai said, “Doctors have promised us they will put the book in their waiting rooms. Mothers have promised us that they will donate extra copies to school libraries.”

Lisa Saunders is the parent representative of the Congenital Cytomegalovirus Foundation (in 2018 she became Leader of Childcare Providers Education & Outreach, National CMV Foundation) and continues to try to educate women of childbearing age to refrain from sharing food, cups and utensils with toddlers who are often shedding cytomegalovirus. Other precautions include refraining from kissing toddlers around the mouth and careful hand-washing after changing diapers. Saunders ran a licensed day care when she was pregnant with Elizabeth and nowhere in the licensing literature was there a mention of her greater risk of contracting CMV.  Her work to get the Connecticut CMV bill passed was covered widely in the media such as Fox CT and Cornell University’s Alumni Magazine (Sept/Oct 2015). A short story about her daughter Elizabeth's life with congenital CMV is told through images and music in this three-minute video. Visit Lisa at www.authorlisasaunders.com
For more information about the book project, visit: https://greenfunding.jp/thousandsofbooks/projects/1613/activities/3503 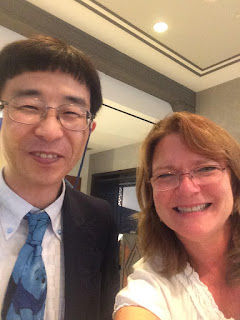 Photograph caption: At the September 2016 Congenital Cytomegalovirus Public Health and Policy Conference in Austin, Texas, Lisa Saunders met Hiroyuki Moriuchi, MD, PhD, Professor and Head, Department of Pediatrics, Nagasaki University Graduate School of Biomedical Sciences, Nagasaki University Hospital, JAPAN.  Dr. Moriuchi, advisor to TORCH-Japan, shared a presentation created with Tomomi Watanabe, a founder of TORCH Association Japan: Of the Families, by the Families, for the Families Wishing to Reduce or even Eliminate Congenital CMV Infection: Activities by a Patients and Families Association in Japan [PDF]. The slides included their work to translate and publish Saunders's book, “Anything But a Dog! The perfect pet for a girl with congenital CMV (Cytomegalovirus).”  At the conference, Dr. Brenda Balch and Lisa Saunders presented: "As One Door Closed, Another Door Opened: The Congenital CMV Initiative in Connecticut"  (Photograph is a "selfie" taken by Lisa Saunders.)
###

Lisa Saunders, lisasaunders42@gmail.com, parent representative of the Congenital Cytomegalovirus Foundation, Leader of Childcare Providers Education & Outreach, National CMV Foundation, and author of “Anything But a Dog! The perfect pet for a girl with congenital CMV (cytomegalovirus)”. Visit Lisa at :www.authorlisasaunders.com

Tomomi Watanabe, info@toxo-cmv.org, a founder and representative of TORCH Association Japan, http://toxo-cmv.org/, (TORCH: Toxoplasmosis, Other infections, Rubella, Cytomegalovirus, and Herpes simplex virus, which can cause serious conditions in the fetus or newborn following asymptomatic or mild maternal infection). Facebook page: https://www.facebook.com/toxocmv/?hc_location=ufi  (or @toxocmv) 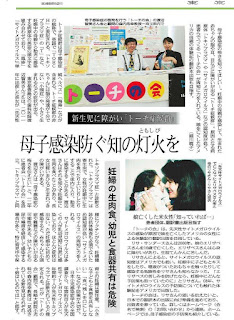 Note: The new Connecticut CMV testing law,  effective January 2016, is mentioned in the New  York Times article, CMV Is a Greater Threat to Infants Than Zika, but Far Less Often Discussed. Saunders' book, “Anything But a Dog! The perfect pet for a girl with congenital CMV (cytomegalovirus),”  is shown in the background of the live video interview with Dr. Gail Demmler-Harrison in the article.

Posted by Lisa Saunders at 5:18 AM

Happiness is all i see now big thanks to Dr. Ubarlo from West Africa (NIGERIA), I never thought that I will live on earth before the year runs out. I have been suffering from a deadly disease herpes Virus for the past 2 years now; I had spent a lot of money going from one place to another, hospitals have been my home every day. Constant checks have been my hobby not until this blessed day, I was searching through the Internet, I saw a testimony on how Dr. Ubarlo. from West Africa (NIGERIA) helped someone in curing his herpes Virus . quickly I copied his Whatsapp Contact: +2348119508814 just to give him a test I spoke to him, he asked me to do some certain things which I did,he told me that he is going to provide the herbal cure to me, which he did, then he asked me to go for medical checkup after some days after using the herbal medication, I was free from the deadly disease, he only asked me to post the testimony through the whole world, faithfully am doing it now, please brothers and sisters, he is great, I owe him in return. if you are having a similar problem just contact him by Email: at drubarlohome@gmail.com whatsapp him on +2348119508814 HIS HAVE THE CURE TO THIS FOLLOWING DEADLY DISEASE [1] Ischemic heart disease [2] Cerebrovascular disease [3] Lower respiratory infections [4] Chronic obstructive pulmonary disease [5] Diarrhea diseases [6] Trachea, bronchus, lung cancers [7] Tuberculosis [8] Diabetes mellifluous [9] Hypertension heart disease [10] HIV/AIDS