Doctor observes that babies with congenital CMV are often born to mothers of toddlers in daycare. All Women Should Know Precautions

Summary: In U.S., 4,000 babies are born disabled by congenital cytomegalovirus (CMV) annually. Pregnant moms of toddlers in daycare and child care providers/teachers are at increased risk for contracting CMV so need to learn how to reduce their chances of contracting CMV (all women should). Lisa Saunders, a licensed in-home child care provider when pregnant, was not told of her occupational risk for CMV until after her daughter, Elizabeth, was born with a severely damaged brain. Women can reduce risk of CMV with CDC prevention tips found at: www.cdc.gov/cmv/fact-sheets/parents-pregnant-women.html

All women of childbearing age need to learn CMV prevention

Mystic, Conn.--"There is an 'inconvenient truth' about cytomegalovirus (CMV), the leading viral cause of birth defects, because it is often found in the child care setting," says former child care provider Lisa Saunders, leader of the Child Care Providers Education Committee, National CMV Foundation. "Although women who care for or have young children in daycare are at increased risk for CMV, all women of childbearing age should learn how to reduce their chances of contracting the virus," she says.
“Almost all the babies that I see who have congenital CMV, there is an older toddler at home who is in daycare. That is a very common presentation: the mom gets her primary infection through her older child who is in daycare and that is when it goes to the baby,” said Dr. Jason Brophy, a pediatric infectious disease specialist, in the Ottawa Citizen (Payne, 2018).
Toddlers can spread CMV to each other, their child care providers and families. "Up to 70% of children ages 1 to 3 years in group care settings excrete the virus...With regard to child-to-staff transmission, studies have shown increased rates of infection with CMV in caregivers/teachers ranging from 8% to 20%” (Caring for Our Children, American Academy of Pediatrics (AAP), et al, revised 2017).
According to the Centers for Disease Control and Prevention (CDC), “About one out of every 200 babies is born with congenital CMV infection. However, only about one in five babies with congenital CMV infection will be sick from the virus or have long-term health problems....A pregnant woman can pass CMV to her unborn baby.” Every year, congenital CMV (cCMV) causes disability in an estimated 4,000 babies in the U.S. (4 million annual births/200 born with cCMV/5 sick or long-term health problems = 4,000 disabled by cCMV).

Prevention tips from the CDC: “The saliva and urine of children with CMV have high amounts of the virus. You can avoid getting a child’s saliva in your mouth by, for example, not sharing food, utensils, or cups with a child. Also, you should wash your hands after changing diapers. These cannot eliminate your risk of getting CMV, but may lessen the chances of getting it” ("Congenital CMV Facts for Pregnant Women and Parents" flyer at: cdc.gov/cmv).

Lisa Saunders, a former in-home licensed child care provider, was trained in CPR, etc., but not educated about her occupational risk for CMV until after her daughter Elizabeth was born severally disabled by congenital CMV in 1989. At the time of Elizabeth's birth, Saunders was operating a daycare center for toddlers in her home, volunteering in her church nursery on Sunday, and was the mother of a toddler--all things that put her pregnancy at greater risk for CMV. Elizabeth had an abnormally small, damaged brain (microcephaly), was profoundly mentally and visually impaired, and had cerebral palsy. After Elizabeth's birth, Saunders was then given educational materials stating that people who care for or work closely with young children may be at greater risk of CMV infection. "This information came too late for my family," says Saunders. "Had I known this before I was pregnant with Elizabeth, I would have been extra diligent about taking preventative measures." Elizabeth died at 16 during a seizure in 2006. Although Saunders was instrumental in helping Connecticut pass a CMV testing law in 2015, wrote a book about Elizabeth’s life, "Anything But a Dog: the perfect pet for a girl with congenital CMV" (Unlimited Publishing, 2008) and other CMV prevention articles and books, CMV prevention steps remain little known.
Recent surveys show that most women have never heard of CMV (Doutre et al, 2016)—including child care providers (Thackeray and Magnusson, 2016).

According to the New York Times, OB/GYNs are discouraged from discussing CMV prevention with their patients. “Guidelines from ACOG [American College of Obstetricians and Gynecologists] suggest that pregnant women will find CMV prevention ‘impractical and burdensome,’ especially if they are told not to kiss their toddlers on the mouth — a possible route of transmission”( "CMV Is a Greater Threat to Infants Than Zika, but Far Less Often Discussed,"Saint Louis, 2016).
Caring for Our Children (AAP, et al.), the book used as a standard for child care centers, states: "Female employees [caregivers/teachers] of childbearing age should be referred to their primary health care provider or to the health department authority for counseling about their risk of CMV infection. This counseling may include testing for serum antibodies to CMV to determine the employee’s immunity against CMV infection…it is also important for the child care center director to inform infant caregivers/teachers of the increased risk of exposure to CMV during pregnancy” (see: nrckids.org/CFOC/Database/7.7.1.1).
How Can the Public Help Educate Women About CMV?

1) Share CDC prevention tips at: www.cdc.gov/cmv/fact-sheets/parents-pregnant-women.html. Scroll to the bottom where you will find this pdf to print and share: https://www.cdc.gov/cmv/downloads/pregnant-patients-cmv.pdf

2) The following flyer produced by the National CMV Foundation is great for hanging on walls and posting on Facebook: 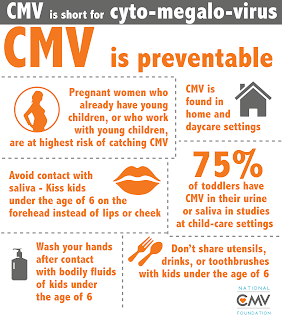 This is also a good flyer from the National CMV Foundation:
https://www.nationalcmv.org/NCMVF/media/ncmvf/download-content/CMV_Awareness-Flyer_11x17.pdf?ext=.pdf

An excerpt of the above press release was posted on PR.com. See: https://www.pr.com/press-release/773215.
An Australian publication, The Sector: Early Education News,  revised it for their country in the article, "Pregnant and working in ECEC [early childhood education and care]? Make sure you know the risks of contracting CMV" by Lyndsie Clark (January 6, 2019). Read more at https://thesector.com.au/2019/01/07/pregnant-and-working-in-ecec-make-sure-you-know-the-risks-of-contracting-cmv/?fbclid=IwAR3sg1ntfNLfQ50VOIjubuqdFZ6QUwv12QJa5JjewzE_PJIj4i2g_FFQsTI

Examples of CMV Protocols in Other Countries:

In Queensland, Australia, suggested control measures include: "relocating workers who are pregnant, or who expect to become pregnant, to care for children aged over two to reduce contact with urine and saliva" (Queensland Government).

In Germany, to protect day care workers from primary CMV infection, their “CMV serostatus must be checked at the beginning of their pregnancy.” If the worker “is seronegative, she is excluded from professional activities with children under the age of three years” (Stranzinger et al., 2016).


Congenital CMV remains little-known in the U.S. for several reasons:

1.     Don’t want to frighten their patients: An OB/GYN quoted in FitPregnancy magazine (June/July '08) said, "The list of things we're supposed to talk about during women's first visit could easily take two hours and scare them to death.”

2.     …most CMV infections go undiagnosed—“The virtual absence of a prevention message has been due, in part, to the low profile of congenital CMV. Infection is usually asymptomatic in both mother and infant, and when symptoms do occur, they are non-specific, so most CMV infections go undiagnosed.” (Article, “Washing our hands of the congenital cytomegalovirus disease epidemic,”by Cannon MJ, Davis KF, published in BMC Public Health 2005, 5:70).

3.     Feel prevention measures are “impractical or burdensome."  According to the New York Times, “Guidelines from ACOG suggest that pregnant women will find CMV prevention ‘impractical and burdensome,’ especially if they are told not to kiss their toddlers on the mouth — a possible route of transmission.”

4.     Concerns about effectiveness of CMV prevention instructions.  “…because of concerns about effectiveness (i.e., Will women consistently follow hygienic practices as the result of interventions?), the medical and public health communities appear reluctant to embrace primary CMV prevention via improved hygienic practices, and educational interventions are rare,” state Drs. Cannon and Davis in “Washing our hands of the congenital cytomegalovirus disease epidemic.”

C.  No central U.S. daycare center licensing procedures to enforce daycare licensing education and methods of CMV control. According to the Department of Labor, "Education and training requirements vary by setting, state, and employer."

D. Low media coverage about congenital CMV: According to the article, "Why does CMV get so much less news coverage than Zika — despite causing far more birth defects? (Shipman, 2018),” published in HealthNewsReview.org, “Researchers we spoke with identified the same factors – fear and the epidemic/endemic nature of the diseases – as driving the media disparity.” Media silence is a problem in regard to prevention, diagnosis and treatment.
TO SEE POSSIBLE CHILD CARE PROTOCOLS, CLICK ON

Today most part of children prefers to spend their time playing video games. In present times these clever and developed machines which are called game consoled are considered as one of the best ways to rest and relax for people who are tired.

This is a really informative knowledge, Thanks for posting this informative Information. Child Care Warwick Farm