Why Does New York Need a Revised CMV Education Law? 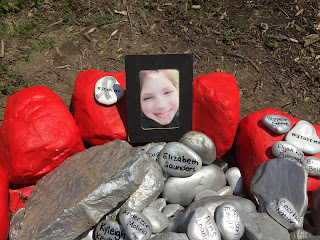 I'm the mother of Elizabeth Saunders, born with severe brain damage from congenital cytomegalovirus (CMV) in 1989. She died in 2006 during a seizure. When I was pregnant with Elizabeth, I ran a licensed child care center in my home, volunteered in our church nursery and had a toddler of my own--all things that put my pregnancy at risk for CMV, the leading viral cause of birth defects, because otherwise healthy toddlers are often excreting the virus--especially those in group care.

When my husband Jim, now a retired Pfizer scientist, and I were living in Connecticut, we helped the state become the second, after Utah, to pass a CMV testing law in 2015.

Now living in New York, we are glad New York passed a CMV testing law in 2018, but more needs to be done in regard to prevention. I wish we didn't need a law to ensure women are educated about CMV, but no other strategy has worked for decades.

CMV is “'a virus that has a PR problem. It’s the most common congenital infection in every population, happening in 1 out of every 150 babies, yet most pregnant women don’t know about it,'' said Dr. Sallie Permar, Chair, Department of Pediatrics, Weill Cornell Medicine, and pediatrician-in-chief, NewYork-Presbyterian Komansky Children’s Hospital. "'It’s a virus we have recognized for over 60 years as the cause of birth defects and brain damage in infants...'" ("Dr. Sallie Permar’s Work Protecting Mothers, Infants from HIV, CMV Lands Her Among ‘Giants’," Weill Cornell Medicine,  June 10, 2021).
"Policy and legislation, backed by accurate science, are viable tools to change behaviour to reduce congenital cytomegalovirus (CMV) infections. Addressing CMV through public policy can provide increased awareness among public health officials, access to existing venues for disseminating information, and much needed funds for awareness campaigns. While some medical professionals and CMV experts oppose public policy and legislation mandating medical practice, most support policies aimed at public education campaigns to provide consumers with accurate CMV education" ("Reducing congenital cytomegalovirus infection through policy and legislation in the United States," Sara Menlove Doutre, Microbiology Australia, 2015).

Angela Cote of Buffalo appreciates the 2018 New York CMV testing law because it helped doctors diagnose why her daughter Elise failed her hearing test giving her options for early intervention. But  Angela wishes she had known about CMV and how to prevent it BEFORE her pregnancy with Elise--especially since Angela had an occupational risk for it. She said, "Not once have I ever heard of CMV or was told about CMV. I was a nanny so I was around children a lot as well as having my daughter, who was a toddler at the time I became pregnant with Elise. Not my OB or any other doctor mentioned or screened me for CMV to see if I had been exposed in the past."

“This is a very common virus, but it remains somewhat under the radar. A woman can unknowingly acquire it during pregnancy, and pass the infection to the unborn baby,” states Sunil K. Sood, M.D., Chair of Pediatrics, South Shore University Hospital, Attending Physician, Infectious Diseases, Cohen Children's Medical Center and Professor, Zucker School of Medicine at Hofstra/Northwell. ”CMV is spread from person to person through body fluids. Day care workers, nurses, mothers of young children, and others who work with young children are at greatest risk of exposure to CMV. Since young children commonly carry CMV, pregnant women and women planning pregnancies should take extra care to avoid urine and saliva from young children” (“Could CMV Be the Cause of My Baby's Failed Hearing Test?”, NYMetroParents, 2016).

To kick-off New York's June 2021 Cytomegalovirus Awareness Month in Lyons (Wayne County) on June 5, we were fortunate enough to have one of the co-sponsors of the Proclamation read it out loud, including the statement that "It is imperative that women are educated  about  the  virus itself  and  simple preventative measures, such as not sharing food with toddlers, and washing one's hands after changing  infants  and  toddlers diapers..." The reading concluded with a placement of over 220 rocks painted silver, the official color of CMV awareness, within a read, heart-shaped rock border to honor the number of babies born disabled by congenital CMV in New York each year. Kristin Schuster of Canandaigua, mother of Autumn born in 2015 with congenital CMV, painted many of these silver rocks and, per requests from families unable to attend, wrote the names of 70 children born disabled by CMV on the rocks. Her daughter Autumn tried to help us place the silver rocks in the heart. Jessica Keukelaar of Macedon was in attendance with her firstborn Kyleigh, born with congenital CMV in 2018. Like Kristin and myself, Jessica worked professionally with young children during her pregnancy. You can watch this music video of the event set to a song written for the cause, "Had I Known (about CMV)," at: https://youtu.be/dUEQmKrG354

The following list explains why CMV has a "PR problem":
IF CMV WAS A PROBLEM, WOULDN’T MY DOCTOR TELL ME?
6 Possible Reasons Women Are Unaware of CMV
1) CMV prevention education is not "part of standard prenatal care”
(Washington Post, "How a common, often harmless virus called cytomegalovirus can damage a fetus," May 15, 2021.)
2) Doctors don’t want to frighten, worry or “burden” patients.
New York Times: "The American College of Obstetricians and Gynecologists [ACOG] used to encourage counseling for pregnant women on how to avoid CMV. But [ in 2015], the college reversed course...Guidelines from ACOG suggest that pregnant women will find CMV prevention 'impractical and burdensome,' especially if they are told not to kiss their toddlers on the mouth — a possible route of transmission.” (Saint Louis, 2016).
3)"The virtual absence of a prevention message has been due, in part, to the low profile of congenital CMV. Infection is usually asymptomatic in both mother and infant, and when symptoms do occur, they are non-specific, so most CMV infections go undiagnosed” (Cannon and Davis, 2005).
4) Medical training downplays the dangers. Pediatrician Megan Pesch, M.D., of the University of Michigan’s C.S. Mott Children’s Hospital, whose third daughter was born with congenital CMV and a progressive hearing loss, said, "I went back and looked at my notes at what I’d learned in residency and medical school, and what we learned was so rudimentary and basic...I waver between feeling guilty and feeling furious. I have spent — how many years of my life in developmental pediatrics? — how could I not have known?”(Washington Post, "How a common, often harmless virus called cytomegalovirus can damage a fetus," May 15, 2021.)
5) Low media coverage. In the HealthNewsReview.org article, "Why does CMV get so much less news coverage than Zika — despite causing far more birth defects?"  the author states,  “Researchers we spoke with identified the same factors – fear and the epidemic/endemic nature of the diseases – as driving the media disparity” (Shipman, 2018).
6) Although U.S. workers have the right to “receive information and training about hazards” (Occupational Safety and Health Act of 1970), there are no federal laws governing CMV education policies for child care workers. The Department of Labor states, "Education and training requirements vary by setting, state, and employer."
Below my signature are ways I'm trying to solve CMV's "PR problem" with the help of the media.

Lisa Saunders and CMV in the Media

Posted by Lisa Saunders at 4:40 AM